View source
Welcome to TibiaWiki!
This collaborative community wiki is a repository of information about Tibia, the free massive multiplayer online role playing game developed and published by CipSoft.
We are currently hosting 20,204 articles. 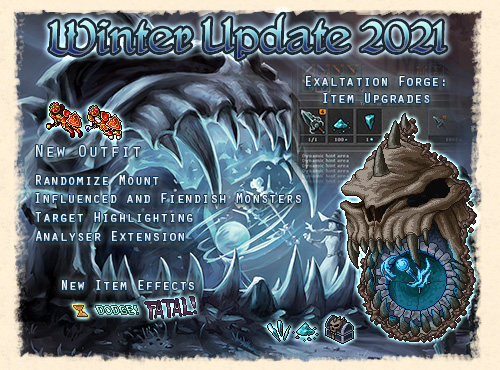 Everything about the Winter Update 2021

What is new in TibiaWiki

Check our page on the 25th Anniversary Update and have fun with its events and activities!
Click here for more information about the Winter Update 2021.
Are you curious about how frequently does every boss spawn in Tibia? We have analyzed ALL bosses spawn history and condensed the results in our newest article. Check it out!
Have you ever wondered what worlds have never failed in The Lightbearer or what worlds have never succeeded? We have analyzed the results of 10 years of event in our new article. Check it out!
Are you going to train your skills with Exercise Weapons? Check out our new Skill Training Calculator!
TibiaWiki interviewed Delany, Tibia's former lead Product Manager. Check it here!
Curious about your real skills without the Loyalty Bonus? Check out our new Calculator!
TibiaWiki has a Facebook page. Pay it a visit and don't forget to like us!

Head to TibiaWiki:Projects to see what we're currently working on.

Today is Monday, so you will currently find Rashid in Svargrond.

If you want to introduce yourself or just want the visitors to know something about you you can make your own userpage, here is a guide on how to do this also containing basic editing tips. You also can use this or this template.
It is recommended to preview (Alt+P) your page before you save it (Alt+S). This will save you time and will simplify your editing.
If you have a question please post it to one of the Admins or the Admin Talk Page.