View source
watch 02:59
Wiki Targeted (Games)
Do you like this video?
Play Sound

The Liquid Black Quest centers around the Deeplings world change. However, the missions are not linearly dependent. This means you can do the missions without having done any previous missions, so you can skip most of this spoiler. 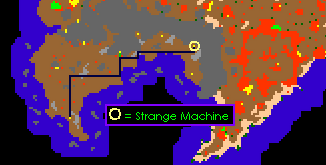 From Gray Beach, follow the coast to the east and enter the south-easternmost hole (here). Head down the large staircase until the bottom. 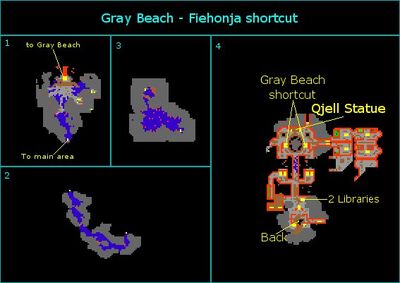 When you reach the bottom of the stairs, follow the cave south to ramp. Follow the one-way path to the main part of Fiehonja. Walk to the north until you find a ramp going up and to the north (here or here). Go up and head further north to a staircase below with a Teleport. Enter the teleport to gain access to the Fiehonja-Gray Beach shortcut.

Note: you can do this at any time, it is not required for the progression of the quest (although you will need it to get Deepling addon 1 and 2). It is in this section only because Deepling stage 1, 2 or 3 is not required to complete this mission.

Kill Deepling Spellsinger's to loot Keys to the Drowned Library. Use these keys to open Seashell Bookcases, found in two libraries shown in the image below, for a chance to get one of the three seashell books. 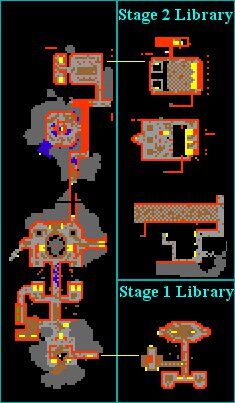 Get all 3 seashell books (blue, green and yellow). This should take around 20 keys, depending on luck. Use all 3 books and go to Spectulus and ask him about the books. Once you hand the three books to him, he will give you the Deepling Outfit.
Be warned: if you buy these from players, ensure they have the blood-marks on them. Similar-looking books have been found containing text in the Fiehonja Library, the blood-marks will distinguish the addon items from the reading books.

- addon items (you need these)

Guide NPCs: The creatures of the deep are currently hiding in the black waters beneath. If their god-king can be pleased with the treasures of the deep, a pathway may open to further venture into their area. ...

Heart of the Sea

Note: This mission is not required to advance to stage 2 or obtain the outfit or its addons. You may want to do this mission for the chance of obtaining a True Heart of the Sea and some other minor rewards. Otherwise, there is nothing to be gained from doing it. You can repeat this mission each time the Deeplings revert to stage 1. Keep in mind that you need to do this mission 5 times to receive any reward.

In order to please Qjell you must sacrifice Hearts of the Sea to replace the original, which was lost a long time ago. From Gray Beach go through the teleport to Fiehonja to arrive near the Qjell statue. West-southwest from the Qjell statue you will find a ramp leading below. Go down and follow the cave north-west. Along the path you will find a Strong Water Vortex which you will need to use later. For now, go south-west from the vortex through the small crevice. It will have a Warning Sign by the entrance. Follow the cave through the thin passage until you arrive at a ramp leading up. The crystal mine can be found up this ramp.

✗ Nothing will happen.

You gathered nothing more than some small chips of red gem.

✗ A Deepling Guard will spawn.

Suddenly a guard jumps at you from behind!

✓ You will obtain a Rough Red Gem.

With considerable effort you manage to knock a largely unscathed rough gem out of the rocks.

With the Rough Red Gem, go back the way you came and stop near the Warning Sign. There is a Strong Water Vortex nearby. Use the Rough Red Gem on the Strong Water Vortex to craft a Heart of the Sea. Now continue on your way back to the Qjell statue. Use the Heart of the Sea, from a distance, on the statue's gem slot on its head. It may take a few tries to hit the correct spot.

Repeat this mission 5 times to be eligible for a reward in the Stage 2 library. When the server contributes a combined total of 100 Hearts, a big red glowing gem will appear in the slot. No more gems can be mined until next Stage 1 when this occurs. Note again that delivering 100 offers no additional reward, and is not required to progress to the next stage—it is only there for flavor. 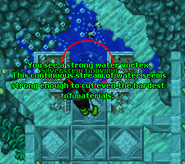 Use the Rough Red Gem on the Strong Water Vortex to obtain a Heart of the Sea.

The Qjell statue loaded with the large red gem.

This mission contributes 5 points to the Deeplings progression.

Talk to Alternative Rock on the surface of Gray Beach. Agree to help and he will give you a Soul Net. 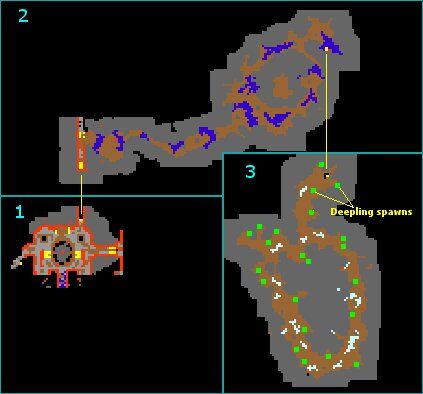 Enter the Fiehonja teleport and leave the protection zone to the north ramp. Follow the cave north and then east all the way, go up the ramp to the spawning ground.

The only creatures in this area are Deepling Workers and Deepling Brawlers, quite harmless compared to the higher-class Deeplings faced on the way in. Your objective is to purify the piles of Deepling Spawn (Cursed) by using the soul net on them. You must purify every deepling spawn before the first one regenerates (about 2 minutes, i.e. all deepling spawns must be pure). You will need speed items/spells if you are doing it alone below level 150. In the map above, the green dots represent approximate locations of the spawns.

You may repeat this mission as many times as you want, but you must wait 5 minutes after the final purification for the evil Deepling spirits to regenerate. Rarely, purifying the final spawn will yield a Small Golden Anchor, this can be used later (stage 3) for the second addon of the Deepling outfit.

Guide NPCs: God-king Qjell seems to be pleased, the floodgates to the Drowned Library have opened. However, a passage to reach the outer rim of the caves still has to be created. ...

Heart of the Sea (rewards)

Required: having delivered Qjell 10 or more Hearts of the Sea during Deepling stage 1. 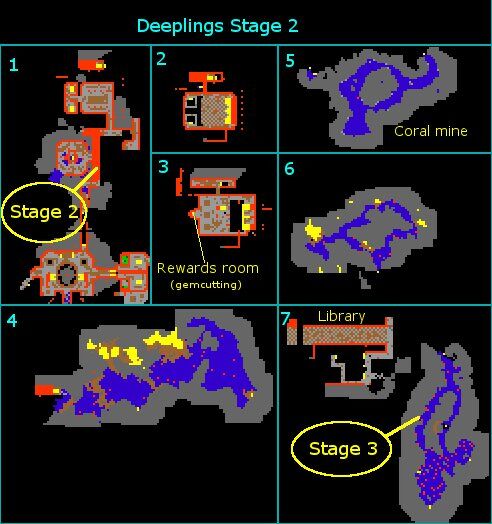 Be careful as Deeplings come in large groups from here on. Go up the ramp and head east to another ramp. Go up once, head around the ramps to the west to a teleport.

If you delivered Qjell 10 or more Hearts of the Sea during the latest Deepling stage 1, you will gain access to the teleport. Inside it there is nothing dangerous, and when using the Treasure Chest (Blue) and the Hoards of Gold on the floor you can get some Platinum Coins and three random rewards. As a rare reward you can get a True Heart of the Sea. It has been confirmed that a single character can obtain a True Heart of the Sea multiple times.

Follow the route to the Qjell reward room, but before the teleport, branch off north through a corridor and down a set of ramps leading outside of the library.

Head furthest east where you will find a ramp (look at map 4 in the image above), go up the ramp and you will find deposits of Fossilised Coral. Use a pick on the deposits until you mine a Crate Full of Coral. Since you need 10 to gain access to your rewards you are recommended to mine three crates full of coral (this is the limit at any one time). Once you have enough coral, head back down the ramp and about half way back to the library ramp and you will find another ramp on the south side of the cave (again check map 4). Head up this ramp and you should find an incomplete ramp and a construction tile. Use a crate of coral on the construction tile and use a shovel on the incomplete ramp. Repeat this until you have attempted to repair the ramp at least 10 times.

Note: you cannot use another player's crates to gain boss access. Access is granted by mining the coral, placing them on the platform allows you to mine more, and shoveling only removes the crate from the platform. In other words, you must mine your own 10 crates to gain access.

Note: If you lose crates you will be unable to mine 1 of the 3 crates permitted. For example if one of your crates are stolen, you can only mine 2 maximum at one point until the next day. The lost crates will turn into regular Crates 24(?) hours later.

Note: if there are no coral deposits or if the ramp is complete, then the server is in Deepling stage 3. You cannot gain Deepling boss access during stage 3. 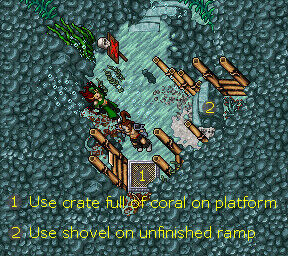 Guide NPCs: The inner arcanum of the deep has been breached. Now nothing can stop the assault on Qjell's dark guardians. ... 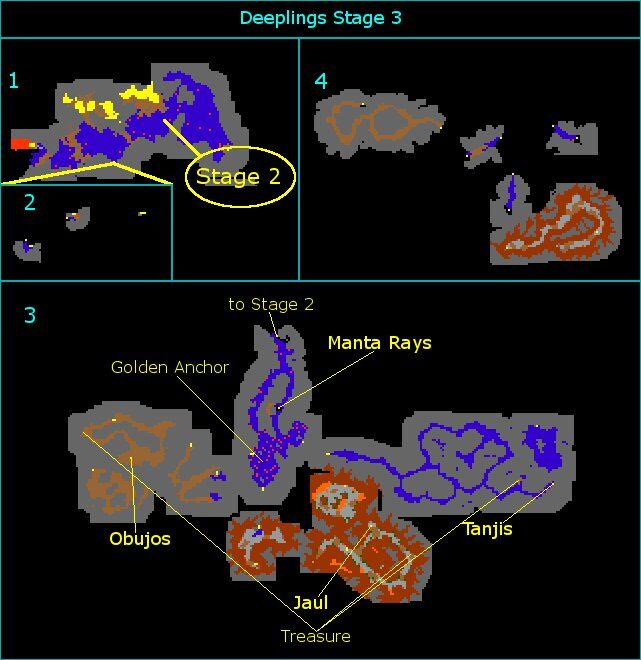 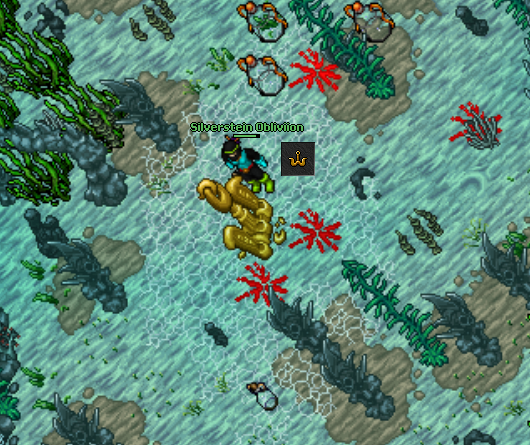 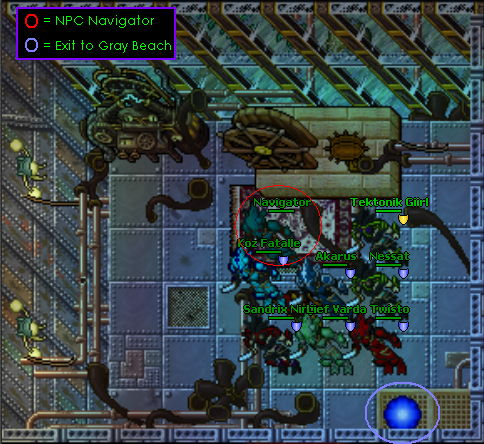 Required: having attempted repair of the ramp 10 times during Deepling stage 2, note that the chances to get the addon items are very rare so this is a minimum requirement. Alternatively, buy all 3 Deepling guardian treasure: Tanjis' Sight, Obujos' Shell, and Jaul's Pearl.

This is the hardest addon, but the idea is very simple. When you kill each boss (Obujos, Tanjis and Jaul), the permission to open the respective chests will be granted to you. There's a chance to get some items from them. When you get Obujos' Shell, Tanjis' Sight and Jaul's Pearl, you have to go to NPC Rock Steady. You have to say "Hi", "Collect", "Yes" three times, that way you will give the items to him to complete his collection. When you have handed all of those he will thank you with the first addon. Also you will get the achievement Spolium Profundis.