A rock formation has been discovered north-west of Darashia.

Go to the Lion's Rock west by north-west of Darashia, near the Darashian portal to Gnomebase, here.

You took some holy water from the sacred well.

You cannot take holy water from the well more than once in a short time (1 day?).

Once you have all these items, make your way to the underground cave. Not far from the start you will find a Dead Explorer, here. Use the corpse to obtain an Old Parchment (Brown).

"Still it is hard to believe that I finally found the mystical rock formations near Darashia, known as Lion's Rock. According to ancient records there is a temple for an unknown, probably long forgotten deity, built in the tunnels deep below the rock centuries ago. This holy site was once guarded by mystical lions and they may still be down there. But yet I haven't succeeded in entering the inner sanctum. The entrance to the lower temple areas is protected by an old and powerful enchantment. I studied the inscriptions on the temple walls and thus learned that the key to the inner sanctum is the passing of three tests. The first test is the Lion's Strength. In order to honour the site's mystical cats of prey one has to hunt and slay a cobra. The cobra's tongue must be laid down at a stone statue as a sacrifice. The second test is the Lion's Beauty. One has to burn the petals of a lion's mane flower on a coal basin. In the sand at the rock's foot I saw some dried lion's mane petals. Maybe these flowers grow somewhere upwards. The third test is called the Lion's Tears. It seems one has to purify an ornamented stone pedestal with ..." At this point the records end because the parchment is destroyed. It seems that is was torn by a big paw …

This floor has a series of tunnels which lead to small rooms filled with semi-weak undead monsters. You must complete 3 trials to progress, it doesn't really matter in which order.

The first trial is to the north-west. You will find a Slightly Feline Statue, here. Use the Cobra Tongue on this statue. The Small Pagoda will light up signifying that you have passed the trial. You will also receive a server message indicating such:

You have sacrificed a cobra tongue at an ancient statue. The light in the small pyramid nearby begins to shine.

The second trial is to the south-west, just south of the first trial. You will find a Coal Basin, here. Burn the Lion's Mane Flower on the Coal Basin and the Small Pagoda will light up.

You burnt a lion's mane flower. The light in the small pyramid nearby begins to shine.

You have purified a sacred pedestal with holy water. You have now passed the last test to enter the inner sanctum.

Completing the 3 trials will enable you to enter the Inner Sanctum, through the Mystic Flame on the west side of this floor. You can enter as many times as you like without redoing the trials.

You have passed the Lion's Tests and are now worthy to enter the inner sanctum!

Go through the Mystic Flame (here) to continue the quest.

On the second floor you will face Ancient Scarabs and Roaring Lions. The floor is split into 3 parts, which are each separated connected by a small tunnel on the third floor. You start in the middle part.

On the second floor, go west and north and down a hole here. Then walk north and go up here. Now walk north and run past a Large Amphora in the middle of the room, here. It will crumble, and along with a Translation Scroll you will receive the following message:

As you pass incautiously, the ancient amphora crumbles to shards and dust. Amidst the debris you discover an old scroll.

Now that you have the Translation Scroll, you must go to certain parts of the map to decipher the scroll. The scroll will automatically activate when you stand on specific tiles. There are 4 tiles that must be walked near to activate the scroll, there is no specific order needed.

With the aid of the old scroll you translate the inscriptions on the golden statue: And the mighty lion defeated the greedy
hyaena. As a sign of victory he took its blood, red as voracity and lust, and created a precious treasure.

Next, go to the floor egg inscription, which is a Carved Stone Tile here:

With the aid of the old scroll you translate the inscriptions on the floor: And the mighty lion defeated the lazy lizard.
As a sign of victory he took its egg, blue as sloth and conceit, and out of a foul creature he created a precious treasure.

With the aid of the old scroll you translate the inscriptions on the floor: And the mighty lion defeated the jealous snake.
As a sign of victory he took its eye, yellow as envy and malevolence, and out of a foul creature he created a precious treasure

Finally, go back to the middle area. Search for a Scorpion Altar, which is on the south-west of the area, here.

With the aid of the old scroll you translate the inscriptions on the golden altar: And the mighty lion defeated the treacherous
scorpion. As a sign of victory he took its poison, violet as deceit and betrayal, and created a precious treasure.

These inscriptions give you the solution for the next riddle, namely the colors (red, blue, yellow, violet).

You can receive a Translation Scroll a few seconds after breaking a Dusty Amphora.

Walk near the Golden Hyaena to translate the 1st inscription. 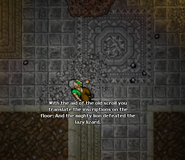 Walk near the lizard floor inscription to translate the 2nd inscription.

Walk near the snake floor inscription to translate the 3rd inscription. 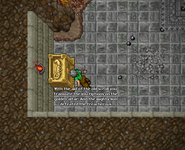 Walk near the golden altar to translate the 4th inscription.
Add a photo to this gallery

After completing the mission to grant access to the Lion's Rock Inner Sanctum and translate the scroll you can do this task to obtain a random reward. In the north-west area of the Inner Sanctum, find the southern rectangular room to the south-west, here. In this room you will find 4 "sun" floor inscriptions as well as a rock in the center. The sun inscriptions represent gem slots.

The north-west slot represents a hyaena's maw. Use a Small Ruby (hyaena blood) on the Stone Tile with a Socket. A Red Flame will momentarily light up the slot.

You place the ruby on the small socket. A red flame begins to burn.

The south-west slot represents a nest. Use a Small Sapphire (lizard egg) on the Stone Tile with a Socket. A Blue Flame will momentarily light up the slot.

You place the sapphire on the small socket. A blue flame begins to burn.

The north-east slot represents a snake's mouth. Use a Small Topaz (snake eye) on the Stone Tile with a Socket. A Yellow Flame will momentarily light up the slot.

You place the topaz on the small socket. A yellow flame begins to burn.

The south-east slot represents a scorpion's pincer. Use a Small Amethyst (scorpion poison) on the Stone Tile with a Socket. A Violet Flame will momentarily light up the slot.

You place the amethyst on the small socket. A violet flame begins to burn. Something happens at the centre of the room ...

Once you have sacrificed all 4 of the gems, an Ornamented Fountain (Bubbling) will appear in the middle of the room where the rocks were. Use the fountain to get your reward, which will be random out of the items listed below.

Something sparkles in the fountain's water. You draw out a beautiful and certainly precious amulet.

Possible rewards from the fountain are:

You can repeat this every 24 hours (not 20 hours, like most other tasks) to obtain another random reward.

At the moment there is neither a treasure nor anything else in the fountain. Perhaps you might return later.

Also note that other players can use the fountain that you revealed, so it's not wise to do it if somebody is around that you do not trust.

You can leave now if you choose to. If you obtained The Lion's Heart you can tame a Noble Lion. To reach the Noble Lions you must go to the lion temple. Go north of the gem room and follow the tunnel west until you reach an intersection. Turn east at the intersection and go down the stairs. On the first time going down here you will receive the server message:

You enter a temple area which is gorgeously decorated and mysteriously unaffected by the course of time.

In the lion temple you will only find Roaring Lions and Noble Lions.

Retrieved from "https://tibia.fandom.com/wiki/Lion%27s_Rock_Quest/Spoiler?oldid=748885"
Community content is available under CC-BY-SA unless otherwise noted.