Koshei's Ancient Amulet or Blue Legs (also 50 Platinum Coins, but you will need to sacrifice this exact amount before you can get the reward).

First, you have to find all four broken amulet pieces:

Pieces of a broken amulet 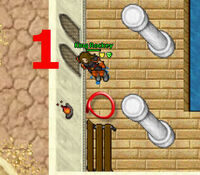 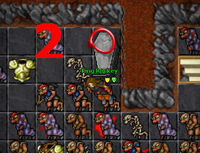 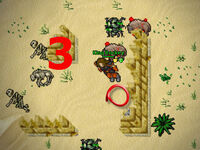 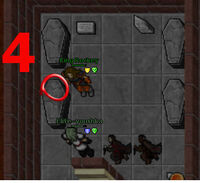 After you have found all four pieces, go to A Sweaty Cyclops in Ab'Dendriel (here). To reach him go through the hole in the wheat field east of depot. Ask A Sweaty Cyclops about an amulet, pay him 5,000 gold and wait 24 hours. Go back and ask about the amulet again. You will receive Koshei's Ancient Amulet.

You can exit the quest here to keep the amulet, or you can continue with the quest. Note that by continuing the quest you forfeit the amulet.

Note: This part will involve killing Koshei the Deathless. It is strongly recommended to have at least 2 level 40 players although higher levels should have no problems with it alone.

You must open the staircase to go deeper. To do so, light the 2 torches (statues) to the north and east and ensure the others are turned off, before using the Ancient Sundial by the stairs. You will hear a "CLICK" sound in the south-west room. Go down the staircase that has been revealed in the coffin in that room.

Follow the cave south and turn east when you can. Descend the stairs. Go down the ladder. Use the Box to obtain 100 Gold Coins and fall down the covered pitfall at the south part of the small room. Walk all the way north and find a level 40 Gate of Expertise. Koshei the Deathless awaits inside. Kill Koshei and use Koshei's Ancient Amulet on The Remains of Koshei quickly because his corpse will disappear after a few seconds and you'll see the the messagee "At least I have it back, my precious amulet. I am glad you didn't use it! I allow you to ....ahh....enter door ..... ahh".

Koshei will only spawn if you have Koshei's Ancient Amulet. If you step outside Koshei's room he will despawn. If you fail to use the amulet on his corpse before it disappears he will immediately spawn to the north by the altar with the text "YOU FOOL! NOW DIE AND SERVE ME IN HELL!".

When you have finally slain Koshei the Deathless, go to the south and enter the western sealed door to claim your prize.

After you made the amulet

Retrieved from "https://tibia.fandom.com/wiki/Koshei_the_Deathless_Quest?oldid=692509"
Community content is available under CC-BY-SA unless otherwise noted.