Jack to the Future Quest

0
(but Sea of Light Quest is required)
(10 recommended)

Piece of Marble Rock, 6,000 Experience Points and the Achievement Truth Be Told or You Don't Know Jack.

After completing Sea of Light Quest ask Spectulus for a mission. He will tell you about a failed experiment he once did, involving an intern named Jack, and will ask you to help him rescue Jack. Go to Jack's house marked on your map (here). Talk to him about Spectulus and go back to Spectulus to report. 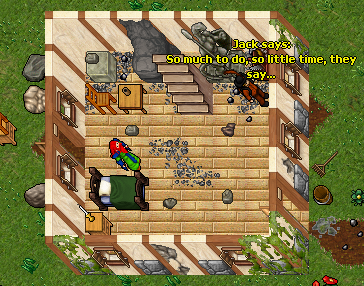 Next, Spectulus will ask you to try and make Jack recall what happened by changing his surrounding with old furniture he used to own. Go to and buy the furniture you were asked to get from Edvard (for a total of 290 gp). Note that since Update 10.92, Edvard sells unique items for this quest. You can't do this mission with the ordinary furniture kits; you should buy the used ones.
All the furniture kits combined weighs 135 oz. So make sure you have enough capacity to prevent a lot of travelling.
Use all the furniture kits inside Jack's house anywhere on this floor just like it's your own house; you will get the following messages:
There seems to be no better place for this amphora than right here.
Jack: Trying to get rid of your junk in my house? Do I look like I need such a... 'vase'?
A globe like this should be in every household.
Jack: What the... what do I need a 'globe' for? Take this away.
The telescope just looks like it was the one thing missing from this room.
Jack: Nice, a... what is this actually?
What a cute horse - and just the right thing to place into this cute room.
Jack: A rocking horse? What's wrong with you?
The red cushioned chair looks quite comfy in that corner.
Jack: Yeah, uhm... impressive chair. Now would you please remove it? Thanks.

After you get all these messages, ask jack about the furniture, and report back to Spectulus.

After failing the last attempt, Spectulus will come up with another idea to try, go back to Jack's house and talk to Mother Of Jack and Sister Of Jack about Jack. 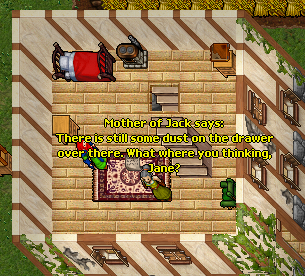 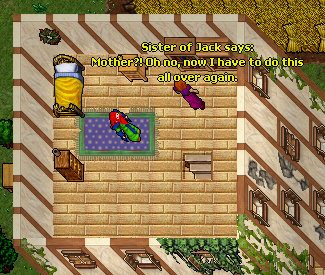 Spectulus will ask you to go back to Jack's house and ask him about his hobbies, he will tell you about his sculpting hobby, try to convince him by breaking the Lizard Statue (by using a Pick on it). this will convince jack you are telling the truth as he lost all his beliefs by now. report back to Spectulus.

Spectulus will reward you 6000 experience points and will tell you that jack in fact travelled to the past and not to another dimension, and sent him a letter to be opened 20 days ago from today, but Spectulus failed to receive it since he was absence from the academy at the time, and will ask you to forget about this whole affair.
You can now decide if you wish to tell Jack the truth or lie to him about it, each decision will earn you one of these two-points achievements:

After this all you can ask Spectulus for further missions and tasks.

Use a pick on the Lizard Statue behind Jack

Congratulations! You earned the achievement You Don't Know Jack.

Telling the truth to Jack:

Congratulations! You earned the achievement Truth Be Told.

Retrieved from "https://tibia.fandom.com/wiki/Jack_to_the_Future_Quest/Spoiler?oldid=748811"
Community content is available under CC-BY-SA unless otherwise noted.