Isle of the Kings

The Isle of the Kings is a small island, located in the sea south of the Ghostlands southwest of Carlin and northwest of Greenshore. Some say that monks took over this island to have a peaceful place to read and study their books and Tibian history. This is indeed what they do but the island's main purpose is burying the old leaders of the Thaian empire.

There is a big mansion on the island. On the first floor you will find a monk NPC named Costello. You can also find the entrance to the deep dungeons, a dangerous place where only brave adventurers should tread. In this dungeon Fugio - Costello's brother - got lost doing some investigation. To enter here, talk with Costello, as he is interested in finding him.
The second floor holds the Isle of the Kings Library. Here you will be able to read many books about Tibia, its history, stories and other things. Please do not steal from the library!

The third floor, accessible through a locked door on the second floor via Key 3350, holds the restricted area. This floor is only for the monks themselves and trespassing will be severely punished. If you still enter you will need to sacrifice a variable amount of gold, depending on your level. Anyone below level 20 will have to pay 500 gp, under level 40 you'll have to pay 1,000 gp, level 60 and under pays 5,000 gp, and anyone over level 60 will have to pay 10,000 gp. To do this, take your money to Costello and say crime or absolution. If you refuse to pay this amount, Dalbrect will not allow you aboard his ferry to or from the isle. It is possible to leave (and enter) through the dungeon, but it's a long and quite dangerous trek.

Accessing the Isle
Since the island is used by the monks to read and study in peace they don't want visitors disturbing them. The easiest way to get there is becoming friends with Dalbrect (here), the man who brings food and wares to the monks. You can find Dalbrect near his boat, north of the Ghostlands. The other way to come there is to follow the way of the Banshee Quest, then go up near the pearl seal.

Note, the Warlocks will only spawn as part of the quest and not afterwards.

This floor has Monks on it, entering it or even opening the door is forbidden. Absolution must be asked for this crime afterwards. 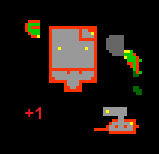 This floor houses the Isle of the Kings Library, a freely accessible information source containing a lot of books which can also be seen in other Libraries. 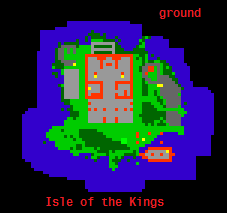 This is the ground floor of the Isle of the Kings.

This is the first floor of the catacombs. Mighty kings are buried in these catacombs. There are 4 Skeletons here.

There are Skeletons and Ghouls on this floor.

There are more Ghouls and some Skeletons on this floor.

On this floor there are also Stalkers and Demon Skeletons. There is also a quest door to the right.

There are more Demon Skeletons, Ghouls and Stalkers on this floor.

The deepest floor, containing mainly Demon Skeletons but also Ghouls, Stalkers and Monks. There is also a quest door to the south-west of this floor. You can go deeper from this point, by using a Pick in the north of this cave, one square north of a pillar, here, Which takes you into the The Queen of the Banshees Quest Area.

Retrieved from "https://tibia.fandom.com/wiki/Isle_of_the_Kings?oldid=748802"
Community content is available under CC-BY-SA unless otherwise noted.