The Isle of Solitude, also called GM Island, located in the bay between Carlin and Greenshore (here) is inhabited by CipSoft members and, before the position was removed from the game, it was also inhabited by volunteer Gamemasters. The building on the island has four floors: basement with prison cells; ground floor has a Big Table and Chairs; first floor has Bookcases and a balcony; second floor has some furniture and a Portal of Citizenship for the island.

This island is only accessible to CIP members who can legally teleport there. The existence of this island has been debated, and many envision criminals brought here to receive their punishment.

Before the Skull System was implemented the only way a mass Player Killer could be properly punished was to get a GM to find the PK and banish them. Usually the said PK would be teleported away from the scene. Some PKs were taken to Isle of Solitude and there received their punishment.

Erig on his April fool's GM test asked a question about the existence of this isle and if you mark a "yes" you get it right!

Also, one gamemaster had a character called GM Island with a sarcastic comment:
"THE MYSTERY IS SOLVED!
A GM ISLAND REALLY DOES EXIST!"

As we can notice in Guido's (and a lot of Cip members) character page, their residence is "Isle of Solitude".

11 CMs in the Isle of Solitude

A player looking at the sign in the entrance of the island, accompanied by the notorious CM Knightmare 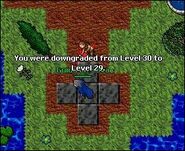 Guido killing a player in the Isle of Solitude

5th Knightmare's anniversary as a member of CipSoft

Amaro de Quester on the Isle of Solitude. NPC Penny can be seen on the ground floor.

GM Bughunter on the Isle of Solitude
Add a photo to this gallery
Retrieved from "https://tibia.fandom.com/wiki/Isle_of_Solitude?oldid=804016"
Community content is available under CC-BY-SA unless otherwise noted.