Jean Pierre needs some help with his cooking...

West of the Blue Djinn Fortress, Near Ankrahmun

CipSoft held a Gourmet Competition in May 2010 where players were asked to design some new recipes for Jean Pierre to cook. There were 4 winning recipes which was introduced into the game with the summer update 2010. (Be aware that some details about these winning recipes might be changed a bit when they were introduced) The winners and those dishes are as follows:

To start this quest, you must find Jean Pierre. He is a few steps to the west of the Blue Djinn Fortress (here) and tell him "hi, cook, recipes, apprentice, yes". He will ask you for ingredients to make a certain dish, bring them back to continue to the next dish. You can look for them as follows:

For this dish you have to bring: 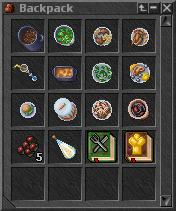 Retrieved from "https://tibia.fandom.com/wiki/Hot_Cuisine_Quest/Spoiler?oldid=809384"
Community content is available under CC-BY-SA unless otherwise noted.