Upstairs at the Dragon spawn nearest to Ankrahmun, here.

Horestis Tomb is a tomb north-west of Ankrahmun. It is comprised of 6 hunting floors and each floor becomes progressively more difficult. It is normally populated with Undead creatures specific to the tomb, e.g. Grave Guards, and with a final boss, Horestis. If Horestis is killed the tomb's creatures will no longer spawn, and Honour Guards will spawn all over the desert between Ankrahmun and Darashia.

It is not known how to repopulate the tomb but it is thought that Honour Guards or Scarabs must be killed in the desert. When the Scarabs are killed a phenomenon called Horestis' Curse may be witnessed: a scorpion sometimes spawns from the scarabs' bodies. 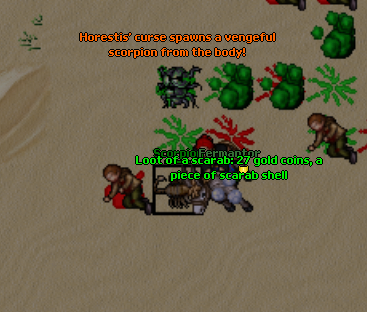 Creatures in Horestis Tomb when Horestis' Curse is not active

Retrieved from "https://tibia.fandom.com/wiki/Horestis_Tomb?oldid=748772"
Community content is available under CC-BY-SA unless otherwise noted.