Below Ab'Dendriel, through a teleporter here.

Hellgate is one among other structures in Ab'Dendriel that has been there for a very long time, even before the elves came there. It is being used to throw in criminals that you want to get rid of. It is secured by a sealed door, but if you bribe Elathriel (sheriff, executioner or avenger - Az'irel in elven tongue - of Ab'Dendriel) with 5,000 GP he will give you the copper Key 3012 which you can use to open the door with.

People thrown in, or entering Hellgate, will come to an underground place far below Ab'Dendriel. Here they will meet skeletons, demon skeletons, ghouls, bonelords among other dangerous creatures. Few survive this long journey. Those who do tell about a strange library where a bonelord is working. All the books in the Hellgate Library are written in a numerical language called 469.

Beside all of this, Hellgate has more secrets. Between these secrets we can find the Treasure Chamber, a place with items only dreamed of, and a mysterious room guarded by a giant spider. This mysterious room has 3 chests on it, and is sealed with a magic wall.

Hellgate has also the entrance of Draconia. There isn't any Protection Zone in Hellgate.

Redbone Castle
Add a photo to this gallery

Note that the vampires only spawn together with Zevelon Duskbringer.

The way to Hellgate 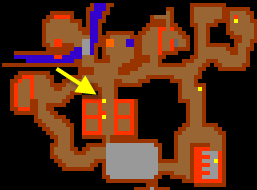 Before you enter Hellgate make sure you know the way out, read Route:Hellgate.

Hellgate Library - some conversation with the bonelord NPC, and some books written in 469, the Bonelord language

Retrieved from "https://tibia.fandom.com/wiki/Hellgate?oldid=700702"
Community content is available under CC-BY-SA unless otherwise noted.