You see a heavily bound book.
It weighs 78.00 oz.
It contains the scribings of many knowledgeable Tibians. It was awarded by Tibia.Wikia.com.

This item can only be gotten by winning a contest of TibiaWiki. You can only read the text if you stand 2 square meters from it or closer.

The creator of the book was Shinner who gave it to the current owner, Hitogedgy on Lunara.

Erig, Benniestake and Hunter of Dragoes received one Heavily Bound Book each for being the contact person of TibiaWiki. However, Benniestake gave his book to Bloodmoon.

During TibiaWiki's Create a Creature contest a total of 7 copies of the Heavily Bound Book were rewarded to:

Every November 22, on TibiaWiki's anniversary, heavily bound books are given to each active Helper who hasn't already received one. So far, books have been given to:

Two contests were held in celebration to TibiaWiki's 10th anniversary. The 10 winners of the Anniversary Lottery were:

The winners of the New Logo Contest were: 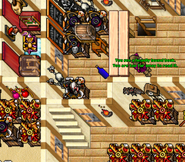 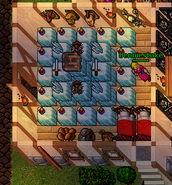 Retrieved from "https://tibia.fandom.com/wiki/Heavily_Bound_Book?oldid=791933"
Community content is available under CC-BY-SA unless otherwise noted.