General Murius is the leader of Markwin's army of Minotaurs. He can most often be found supporting the minotaur troops in Mintwallin. You can use an Obsidian Knife on his corpse in order to get a Minotaur Leather.
He is thought to be an allusion of General Marius, who was a general in Ancient Rome. 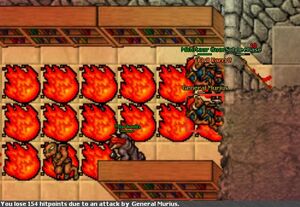 One way to kill it is with a blocker and SD's.

Retrieved from "https://tibia.fandom.com/wiki/General_Murius?oldid=826489"
Community content is available under CC-BY-SA unless otherwise noted.