View source
watch 04:03
Wiki Targeted (Games)
Do you like this video?
Play Sound

This article or section is deprecated.

The information on this page is no longer relevant to the Tibia or TibiaWiki community. It may have been removed from the game or made inaccessible.

The information in this page or section may not be accurate anymore, but this page should be retained for posterity.

Gamemasters were CipSoft staff with a supervisory role. Before August 2010, a major group of the Gamemasters were volunteer players entrusted with these powers by Cipsoft. It was their duty to investigate and to punish rule violations in Tibia. To do so they had a number of special abilities, like the right to check players' criminal records, the ability to broadcast red messages, the ability to teleport to any player online , among others and to certain key locations. 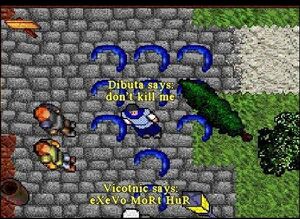 Also, gamemasters could impose penalties on players which include notations, banishments and even account deletions (if the account had received a final warning already). In addition to regular gamemasters there is also so-called Customer Support (the old "Senior Gamemasters").

You could recognise gamemasters by the abbreviation "GM" at the beginning of their name. Also, gamemasters wore a special blue outfit which was not available to regular players. Gamemasters could send messages in red text and also broadcast them to the entire server to make sure people will pay attention to what they are saying. Finally, please note that since gamemasters were standard in-game player characters they were permanently level 2.

Before their removal - read below - possible candidates to gamemaster job were chosen by CipSoft.

Retired gamemasters were given the option to become senator or Senior Tutor.

With the new account system, CipSoft was able to bestow a whole account the status of a gamemaster instead of doing it manually to a specific character.

After the implementation of new gameworlds and the premium account system, CipSoft provided Gamemasters with a new, invincible tool character, which had no vocation, no carrying capacity, and was always level 2.

As of Summer Update 2021, three out of the eight items are still unobtainable: Dark Trinity Mace, The Epiphany and Solar Axe.

It is still unknown all rewarded gamemasters and all items that were chosen but below are some confirmed information.