Main part of Tibia screen is occupied by the Game Window. This is area which the most of time you are looking at. All your adventures, talks with your friends, other players or NPCs, and also battles with creatures or other players are visible here.

When there is a night or you are in the underground caves, depending of the Ambient Light option in settings, you can also see a darkness or even completely black areas of the Game Window.

Communication is a very important aspect everywhere. Tibia is not an exception.

When playing Tibia you have to read many messages in the Game Window. You can distinguish type of one from the other by the color or position.

Also, with icons and other graphics, you can get to know about your or other character's Hit Points (as well as creature's HP), membership or leadership in Party or Skull mark on PvP world. 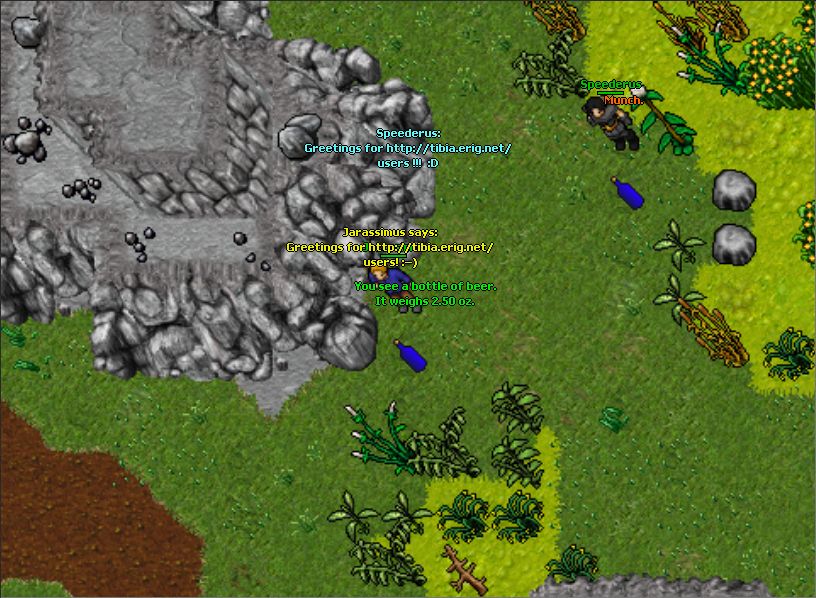 When appropriate option in settings is turned on, all players, NPCs or creatures have their name and/or HP amount (in form of short horizontal line) shown above their character. This can be also switched by Ctrl+N shortcut key (see description of shortcut keys further in this article). Color of this name and/or line is dependent of that how many HP has a given player or creature (NPCs cannot be attacked, thus they have always full HP) and is:

Messages that players or NPCs talk or yells to other are shown in yellow color near the person who said or yelled anything. Such messages also appear in Default channel in console under the Game Window.

Messages that players write to your character privately are shown in cyan color at the middle of the Game Window. Such messages also appear in Private Chat Channels or in Default channel in console under the Game Window.

Sounds that are produced by creatures and also players (when they are eating food or drinking) are shown in orange color near that creature or player.

When there is a player, item, creature or another object which you Look at (see description of the commands further), the text describing that object is shown in green color at the middle of the Game Window.

Some events messages such as advances to next level or skill, and also some special game events (like raids of specific creatures on the towns) are shown in white color at the middle of the Game Window.

There are also some messages for your character to let you know what's going on ("Sorry, not possible", "First go upstairs", "You are poisoned" etc.) that are shown in white color at the bottom of the Game Window.

Depending of settings these messages can also appear in the console under the Game Window.

Sometimes it appears a special message from server or from Gamemaster who want to broadcast it to all players, then it's shown in red color at the middle of the Game Window. Such message also appears in Default channel in console under the Game Window.

Another players or creatures can be shown in a square border (look at the picture below) of color:

Additionally, near the character (your or others) can be visible some icons:

See above links to get more informations. 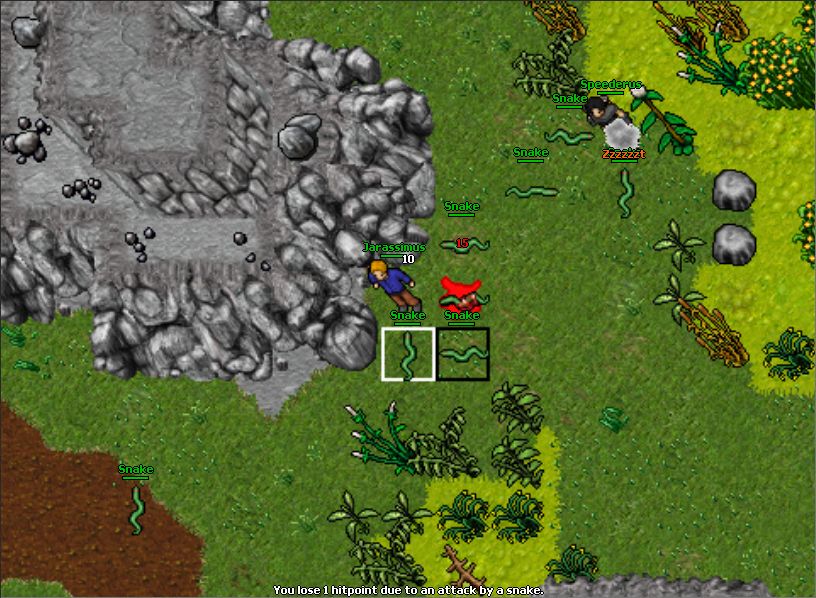 When Secure Mode is turned on - you cannot directly attack any other player on PvP world who isn't marked by any skull.

During the fight, if appropriate option in settings is turned on, it appears a number above creature or player who is getting a damage from the other. The number indicates how much HP is taken by a hit. And the color of this number indicates type of the damage:

Of course, when you lose all of your Hit Points - you are dead and then return to the temple of your hometown.

After a creature or other player was killed, when the winner gets an experience points (in fact, all of the winners divide these experience points between them when there was more than one - the same goes for the summons), it appears a white number above him.

Many of dead creatures (as well as the containers) can be Open (see description of commands below) then you can take a loot from them.

Anytime when no dialog window is opened, you can perform some commands on visible objects in the Game Window. For example: you can Attack a creature or other player (on PvP world), Use an object (or Use with another object) or only Look at it, also Follow another player or Trade with him some items, Set outfit of your character and so on. 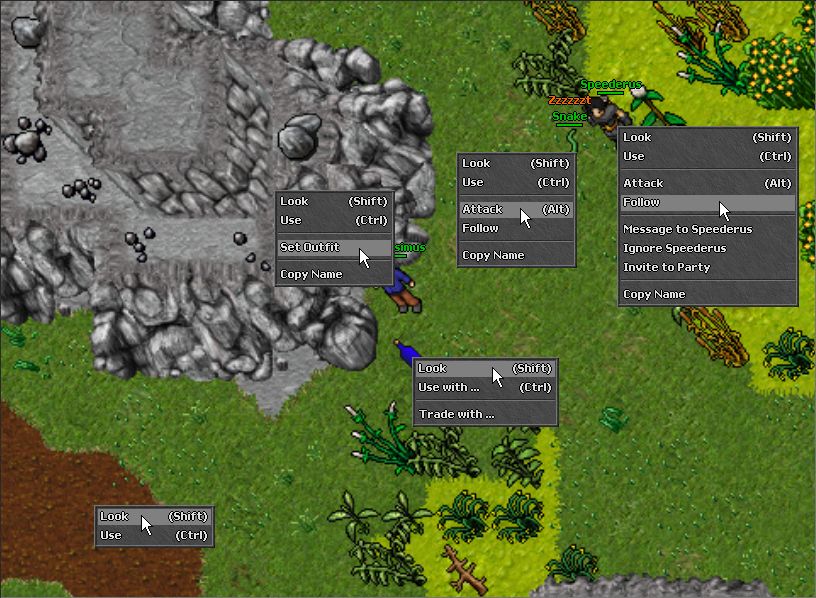 Such actions as Attack or Follow are automatically canceled when the target object is lost, for example the player or creature goes out of visible area of your Game Window or he goes up or down an area level (eg. mountain, ladder, stairs etc.). When the target is on the same area level, but there is no way to the target, such actions are not canceled, but of course cannot be performed until at least one way to this target will be available. However, when you attack from a distance - you can do it even if between you and attacked object there is a river or sea, lava, trees, bushes, etc.

You can also move items and push creatures (however not all can be pushed) or players (see: Wrestling) by pressing left mouse button on them in Game Window, then dragging a mouse pointer (it turns into a crosshair) to the target position, and finally releasing mouse button. Items can be moved into your inventory or into containers that you have open (windows on the right of the Game Window), eg. into your backpack or into a box which stands on the floor.

When you are moving items that are stackable (eg. food, money, worms etc.), after release mouse button at target position Move Objects dialog window appears, where you can select how many pieces of that item you want to move. Moreover, you can quickly move (without displaying Move Objects dialog window) one or all pieces of that item at a time when during dragging it you are holding a key:

Creatures (those which can be moved at all) or other players can be moved one step of each direction. By dragging a mouse over your character you can also move yourself! To move a creature or player in any direction, a field behind him cannot be occupied by wall, bush, tree, water area (river or sea), lava, parcel, box, chest, or similar obstacles (even honey flower). This is often used by some players to abuse a game weakness when they are blocking your passage, e.g when you want to run away from the strong monsters.

Depending of Tibia Classic Control option in settings there are two ways to perform of commands listed above.

You can right click on the object (e.g item, door, ladder etc.) to Use it or, if that clicked object is a creature or player (on PvP world), to Attack him. This is quite fast method to perform actions, however it may lead to expensive mistakes (eg. when you accidentally attack another player on PvP world, who is much better skilled than you).

You can click both left and right mouse buttons on any object to Look at this.

However, it's not always too comfortable to use context menus (eg. when many creatures attack you). Because of this you can perform some of these commands on the given object by pressing and holding one of keys that are listed below during left click of this object in the Game Window:

Retrieved from "https://tibia.fandom.com/wiki/Game_Window?oldid=763902"
Community content is available under CC-BY-SA unless otherwise noted.