The Flash Client is one of three official Tibia Clients, the other being the Tibia 10 and Tibia 11 clients. The Flash Client is always activated if the system requirements are met and can be reached through the Account Management page on www.tibia.com . You only need to select a character from the below list by clicking on it's row, then click on the "Play" button to open up another browser window.


They have written it in Flash as compared to C++, in which the stand-alone clients are written. The Tibia 10 was still available to be used when it was released. Some information has been released and some community feedback has been given on certain aspects.


Even being an official and supported client, many players of Tibian community were still skeptical about it, but the programmers promised that no changes would be made in the game play, and Tibia would remain Tibia!
One of the most significant benefits is that the client can be customised in so many ways (window positioning, text colours, disable some messages from appearing in game window and/or console like spells or private messages, etc.); you can set just about everything in your own style. The other main benefit is the addition of Action Bars with 120 slots that can be used with hotkeys, besides other preset hotkeys. It also gives the player the ability to set or change hotkeys to other actions like logging out, toggling between offensive/balanced/defensive fighting, toggling chat mode on/off or opening you root container (the main container, usually a backpack, placed in your inventory). Walking can also be set to a different key set (for example WASD, or DZXC or any other combination) with the option "chat off". 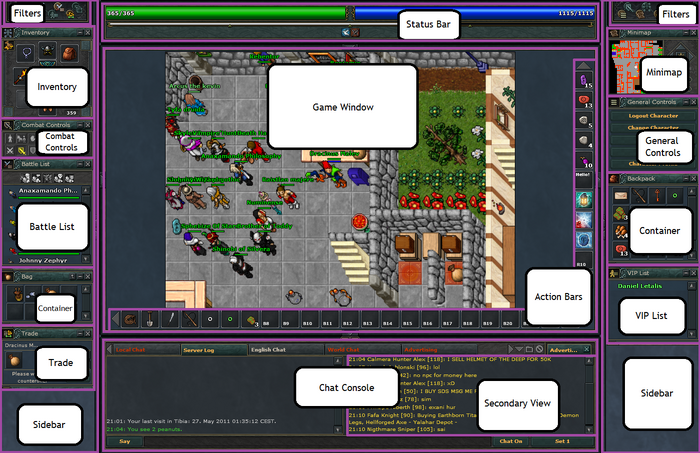 The screen of the Tibia Flash client is divided into several parts:

Compared to the stand-alone clients and specially Tibia 10, some of the advantages and new features are:

Some existing features have also changed:

CipSoft already released some images about their developing Flash client. They are listed below. 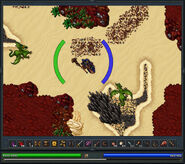 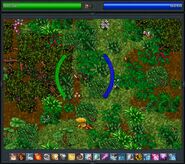 Sortable Battlelist
Add a photo to this gallery

Retrieved from "https://tibia.fandom.com/wiki/Flash_Client?oldid=766726"
Community content is available under CC-BY-SA unless otherwise noted.