Ferumbras was removed from society and banished to his citadel by the mages at the Edron academy. He has a massive arsenal of spells to torture and heal.

Ferumbras was an evil sorcerer who once instilled fear into the heart of Thaians many years ago. Summoning demons and warlocks, he attacked Thais twice during the span of his life. After his second attack, he was finally killed and most assumed him to be gone for good. But his wrath was brought down when he returned some time later and found his daughter, Fortinbrae, had been killed and her soul trapped by the brave knights who had slain her, in the Plains of Havoc temple. Ferumbras traveled there to recapture his daughter's soul, but he was defeated again and disappeared. There are many rumors about his current whereabouts.

After he was slain, he produced several oddly-charged runes, including a Sudden Death rune with 0 charges and a Poison Bomb rune with over 30 charges.

There are 2 Magic Pillars at his room, which can summon up to 3 Demons each.


Ferumbras was first sighted on Eternia on August 21th 2006, but a bug prevented players from reaching him. He appeared there again after two weeks when the bug had been fixed.

Before he appears, three messages are broadcast in white text to all players on that world:
00:00 The seals on Ferumbras' old citadel are glowing. Prepare for HIS return, mortals.
00:10 Ferumbras' return is at hand. The Edron Academy calls for heroes to fight that evil.
00:20 Ferumbras has returned to his citadel once more. Stop him before it is too late.
What people have to say about Ferumbras

His citadel on Kharos. You must ask Zoltan for permission to access the citadel.

The main blocker (the first entering the TP) gets to ferumbras and waits for help from the other knights. They take the summoned demons with Exeta Res. All shooters stay 1 sqm away and try to kill Ferumbras as fast as possible. Druids should use Wild Growth runes next to the shooters to avoid Demons from targeting, shooters will still be able to shoot SDs.

NOTE: You can (or could) block Ferumbras' spawn by placing one or more players on every tile of the northern part of the room he spawns on. It has happened on Refugia on March 21st, 2011.

Ferumbras was a sorcerer who turned evil - perhaps through the influence of Zathroth. His first attack occurred in the early years of Tibian history but was not very notable. He did cause some damage and killed many people, but he was not as strong as he would become. As well during his first attack his daughter, Fortinbrae, died and this likely ended that attack.

Ferumbras, now a level 145 sorcerer (controlled by one of the members of the CipSoft team, Durin), made another war against the people of Tibia. He was created to be killed, but was extremely hard to beat because he had the intelligence of a human and could summon anything he wanted like Dragons... and Warlocks, creatures who had never been seen before in Tibia. Santa Claus was also present and attacking people during his raid on Thais, however that was probably another CIP controlled character at the time.

His first rampage began in Thais taking many lives as he went. After a strike he would disappear for some time then return the next day for another battle. After a few days the people lured him out to the Plains of Havoc. There a large army gathered and eventually overwhelmed him in front of the temple. He was defeated for now and would not return for many years.

In more recent years the mages of Noodles Academy of Modern Magic had located Ferumbras secret hideout far south of Thais on an island - Ferumbras Citadel. There they sealed the doors and cast magic about it that he would never return.
Since that time for reasons unknown, perhaps through the dealings of evil gods and demons, Ferumbras rises again in his Citadel, ready to wage war against Tibia again. 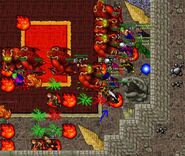