Members of the Order of the Falcon

You see a falcon knight

Falcon Knights are members of the Order of the Falcon. A once honourable and revered order of knights. They fell victim to a curse centuries ago and are now mere shadows of their former, noble self. The mighty knights are expertly trained and can prove an unsurmountable obstacle in combat. These relentless warriors are still bound to their oaths and will defend the order to the death. 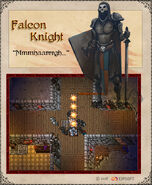 They move slowly for their strength.

The combination of its strong Melee attacks and it's frequently used Earth Berserk can be very dangerous when fighting groups of these creatures. The Falcon Knights do not attack from distance, but the same cannot be said about the Falcon Paladins. Thus, try to wear some physical and earth protection against them, but also energy protection for the damage you'll inevitably take from Falcon Paladins.

Due to their small moving speed you may not notice how many Falcons are coming your way, so be careful when walking around the Falcon Bastion since you'll notice Falcons slowly coming from all directions. An unprepared team may lure too many Falcon Knights and Paladins and get into serious trouble.