West of Ab'Dendriel, on an island, (here).

Many years ago, king Xenom wanted to build the grandest city ever, the city now known as Carlin. In order to accomplish this, he sent his workers and his elite army unit, the Red Legion, north to build him his city. The Red Legion were cruel to the workers and many believed they didn't even try to protect the workers due to the fact they were raided by Orcs many times. The workers soon began to protest and rebel against the harsh conditions put on by the Red Legion. In response, Xenom began to lock away any that rebelled in Elvenbane, which was recently constructed along with Carlin. A group of these prisoners consisted of the king's sister's (Elorana's) friends. As her scouts told her of the harsh conditions in the castle she conceived a plan to destroy the Red Legion, ending their reign of cruelty over the workers.

As her plan unfolded she gathered all the druids and hunters loyal to her, and made them dress up as Orcs. Every night they would attack Elvenbane. Finally, the general of the Red Legion got tired of it and they marched out during the night to destroy the Orcs. The real Orcs that were there were not prepared for an attack and the Red Legion desecrated them with little of their own casualties. However, it is rumoured that the Orc Shamans cursed the Red Legion. Driven from their home soil, the remaining Orcs scattered across Tibia, seeking out allies among the Minotaurs, Trolls, and Cyclopes. With their forces bolstered they began to lay siege to the castle. Knowing that the prisons were located underground they began to dig a tunnel. When the underground walls were breached, the workers were just being forced into their rooms by the guards. Chaos ensued as the desperate workers tried to get away, but were trapped between the orc alliance and the guards trying to get down to fight.

When Elorana heard word of the siege she quickly rushed to Elvenbane with her own forces in hope of saving the workers but, by the time they got there, it was too late and the orc alliance began to attack her forces, forcing her to withdraw back to Carlin. After the siege she could not allow such a powerful force so close to Carlin, so she deprised the same trick as she had with the Red Legion and started turning the Orcs' allies against each other. By doing this, she saved Carlin...

As the orcs and the other races of the alliance went their separate ways there is still a stern occupation of the castle with all the races. Many other creatures have started joining them as well, including the Elves who come to study the ancient knowledge that was stolen from the Red Legion. Many spells and strange powers surge from the main tower due to their erratic experiments.

Elvenbane is an island just west of Ab'Dendriel (here). It is only accessible from an underground cave with its entrance located here.

Also, note that the passages in the castle of Elvenbane are so narrow that only one person can walk through at a time. Often people will purposely stay in your way if a lured Orc Berserker or Minotaur Guard comes your way, so be careful!

Creatures in Elvenbane and maps 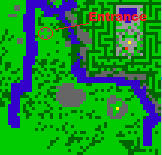 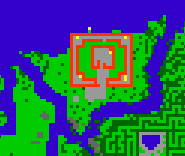 Retrieved from "https://tibia.fandom.com/wiki/Elvenbane?oldid=748563"
Community content is available under CC-BY-SA unless otherwise noted.