A magical tower has appeared east of Edron out of the blue. A mad mage without any connections to the Academy has created this building and conducted several experiments there - some of which failed quite horribly.

Go to the tower south of Telas' house, here:

You need to talk with Servant Sentry to get a 'Slime Gobbler'.

You have to clean the area below of slime fungus (including the walls). To do this, use the Slime Gobbler on the fungus. The Slime Gobbler has an exhaust of 5 seconds. Some players tended to switch characters inorder to do this stage quicker, but that's not possible anymore since you cannot log out there. 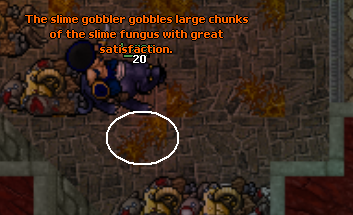 After you've cleaned the whole dungeon, Iron Servants, Golden Servants and Diamond Servants start to spawn. There's 25 waves in total and with each wave, there's more of enemies to face. What you can do, is leave a monster or two in the south part of the dungeon, coming back for it when you've killed all the others. This way, you can prevent yourself from being in the middle a newly spawned wave and getting trapped. Be very careful when you're getting close to the end of the waves! During the last wave, you will also have a chance to encounter the powerful Mad Mage.

If you are lucky, during the waves you will also loot Slime Mould. You need 20 of these to get the outfit.

Note: They are a fairly rare drop, so you may want to buy the Slime Mould instead. The prices vary from 10000 to 35000 gp depending on the world. 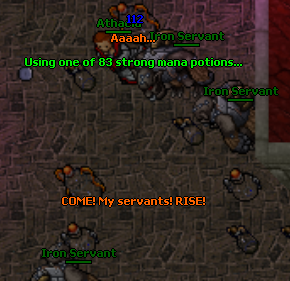 After obtaining 20 Slime Mould, talk to the Broken Servant Sentry in Farmine (right next to the Steamboat). 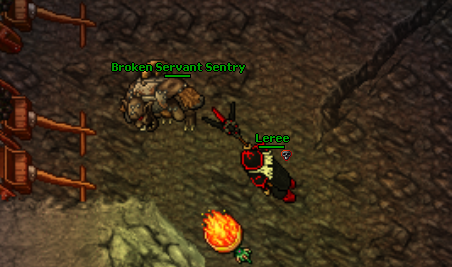 To get the addon, you need to loot the Mage's Cap from Mad Mage, that spawns during the last wave (see Their Master's Voice World Change). He may spawn in one of these different locations to the right.

You need to loot Elemental Spikes from the Raging Mage and give it to Broken Servant Sentry.

For more information about when he spawns and how to kill him, see the Raging Mage's article. 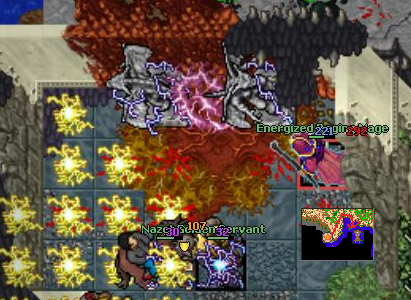 Give the Elemental Spikes to Broken Servant Sentry in Farmine to get the second addon.

Retrieved from "https://tibia.fandom.com/wiki/Elementalist_Outfits_Quest?oldid=795596"
Community content is available under CC-BY-SA unless otherwise noted.