One of the experiences of Magister Alverus went wrong, and now he is frozen in one of the Ivory Towers in Edron. Only with the power of the four vocations together (each with an element) can this great alchemist be saved.

Dragon Robe for Sorcerers, Greenwood Coat for Druids, Windborn Colossus Armor for Knights and The Ironworker for Paladins. Lord of the Elements achievement.

After you have the 20 enchanted gems of your vocation, talk to Arkulius, who is next to frozen Alverus, located on the top floor of the south east Ivory Tower in Edron, here. Ask him about Alverus, shrines, sphere and about your mission and confirm with yes.

Note: You will need to be at level 80+ or Arkulius will not give you permission to enter the spheres.

Once you get the mission, head to the 4 elemental shrines on the lowest level of the middle tower in Ivory Tower, here. 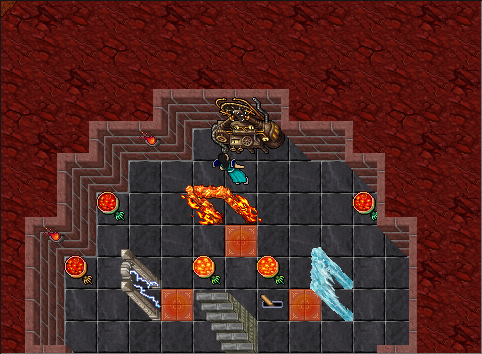 Note: After arriving in the realm you may leave, but you will then need 20 more enchanted gems.

The creatures in each realm are:

In the realm you need to kill the monsters until you have 8 soils:

After getting the soils, head to the part of your realm that has no elementals in it, but have a circle formed by 8 pillars (varies for each vocation/realm). 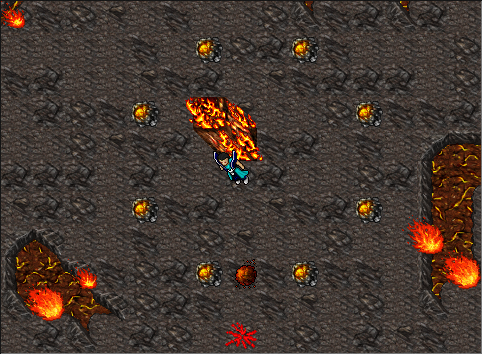 Place each soil on the floor beside each of the 8 holes, ice cubes, mushrooms or lava hole. After the soils are at the side of the place you will use them, lure 2 monsters next to the circle and kill both out of it. Then you can quickly activate your 8 soils by using them on the 8 marked places, followed by throwing 1 single body of a slain elemental into the circle. This will summon the overlord of your element.

Attention: Upon using the first soil, you will have 2 minutes to kill the boss. If you kill it before this time ends, you can throw another dead body inside the circle, making another boss appear. By repeating this procedure, it is possible to spawn more bosses during this 2 minutes. Keep in mind you cannot spawn more than one boss at a time. It's important to emphasize that the 2 minutes start to count by the moment you use the first soil, so if you take long to use the other soils you will waste precious time.

When the boss spawns, kill it and he will drop one of the following items:

Paladin's Overlord
Add a photo to this gallery

Note: Only the player that deals most damage to the boss most will complete the mission. If you are not the killer of the boss, it will count as if you have not completed the mission given to you by Arkulius, and he will reject you when performing the next step.

After you have the boss item, go to the exit of the realm and go through the teleport. Report back to Arkulius. You will now be ready to do the final mission with the 3 other vocations.

Lord of the Elements

Note: Before you do the final mission, it is recommended that each player has their own Obsidian Knife.

Note: You will need your boss items here or you will be unable to teleport.

IMPORTANT: After the Lord of the Elements is dead you only have 10 seconds to loot it or the body will close. After that it is possible to skin.

Note: All players will get the neutral matter.

You will be able to enter the room again with your team after 10 minutes have passed.

Retrieved from "https://tibia.fandom.com/wiki/Elemental_Spheres_Quest?oldid=683841"
Community content is available under CC-BY-SA unless otherwise noted.