This boss' summons can hit harder than the boss itself, so extra care should be taken with them. If you have two knights, one of them can take the boss and the other the summons.

After some seconds, all players will have their appearance changed into either a Water Elemental or a Fire Elemental. Along with that, around each player a large magic spell of the corresponding element (water/fire) will appear every turn. If two players that have different appearances get near each other, they'll take around 2000 damage. In order to avoid this, the recommended strategy is to have the knight positioned at the center of the room with the boss and the other team members around him, at safe distance.

The transformation resets every few seconds, which means that in case a shooter has a summon targeting him, this player can wait until his transformation matches the Knight's and bring him the summon. This must be done fast however to avoid a change in the appearance in the meantime. 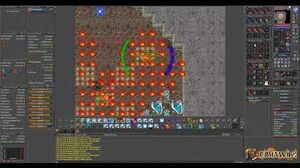