Drefia is an ancient city now inhabited by Necromancers of the Brotherhood of Bones and their fellow undead, which lies west of Darashia (here).

Drefia was once a Thaian colony. It became a magnificent city that just like Kha'labal was fertile; full of trees and other jungle-like lush greenery. But then the Necromancers of the Brotherhood of Bones came to Darama and corrupted the inhabitants of Drefia. The Necromancers allied with the Blue Djinns in the Djinn Wars. As revenge, the Green Djinns conjured a whirlpool spell that has dragged the town into the earth, all but the highest buildings were completely covered by sand and by rubble. The Necromancers fled in refuge downstairs.

There are several ways to get there, however, all of them are across the mountain-complex parting Ankrahmun, Darashia, Drefia and Tiquanda. Among other methods you can rope yourself up here, or come from the passage between Darashia and Ankrahmun.
On the mountain be prepared to face lots of Scorpions, a good hint is to save up a lot of Mana for Antidote-spells.

This article or section is outdated.

The information on this page is no longer up to date with the Tibia or TibiaWiki community, and needs to be reviewed.

Drefia is split in two halves, the southern half is the "easy" half.

You can find a total of 4 Ghosts on a ship in the west of Drefia.

Beyond the Medusa Shield Quest there is also a large Wyrm spawn, more information can be found at Drefia Wyrm Lair:

Deep below also lies the infamous Vampire Crypts, being home for not only Vampires but also Banshees and other undead. A common place for solo hunts by Paladins and Mages. It is also home to the Drefia Grim Reaper Dungeons and the Halls of Sacrifice, home of Necropharus.
It is recommended to use Invisible or Stealth Ring when walking through the ground level to your hunting place there.

This article or section is outdated.

The information on this page is no longer up to date with the Tibia or TibiaWiki community, and needs to be reviewed. 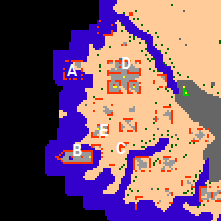 There is a Royal Mailbox on mark C.

There are 3 Pirate Skeletons, 4 Ghosts, 1 Pirate Ghost and 2 Ghouls on the ground floor of the boat. Upstairs there are 2 Ghosts and 1 Demon Skeleton.

The large ruins has some Ghouls, a few Demon Skeletons and a Stalker or two on its ground floor. Furthermore, it has 4 towers:

In the large ruins you can find stairs down to deeper caves containing stronger creatures and quests.

There are 4 Ghouls on the first floor going down and 4 Demon Skeletons on the second floor, which also contains 6 empty Coffins.

Go to the largest ruin in Drefia, and go down the stairs until you arrive in the last floor with stairs. Be careful, there are many Ghosts, Ghouls, Demon Skeletons, Stalkers and Scorpions on the way down, a Stealth Ring is strongly recommended here.


Still on the floor of the Library, heading south are two spawns. South-west has 3 Necromancers and the south-east has 2 Necromancers. Directly south there are 4 Demon Skeletons around a hole.


Down this hole there are 3 Ghosts and 5 demon skeletons, then there is another hole that lead you to Vampire Hell and a stair that brings you to Drefia Grim Reaper Dungeons. Unless some are lured, there will be 0-3 Grim Reapers near the stairs.

There are also some quests in Drefia.