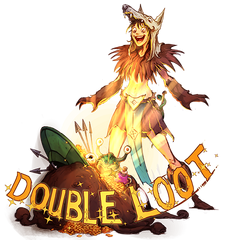 Double Loot Events are events during which creatures drop twice the loot they usually do. So far, all Double Loot events have occurred during weekends. A similar type of recurrent event are the Double Experience and Skill Events. A somewhat similar event was the Special Outfit Event which increase by 2 to 5 times the drop rate of certain items dropped by creatures that existed exclusively in premium areas.

On July, 2018, CipSoft announced that Double Loot events were removed from the regular monthly event rotation because they "were never that well received from our player base" and "offered a disproportionately high gold gain while the different possibilities to drain those gold amounts were not used in a frequency that would justify the continuation of such events".

On 2020, however, CipSoft decided to return with Double Loot events, after an official poll in which the majority of players voted on it against a Rapid Respawn Event. CipSoft's reasoning for returning with these events was, among others, that a lot has changed again [in Tibia], and since there is not a huge difference between rapid respawn events and double loot events in regards to the loot generated, you now get to choose what you, personally, would rather have, what you would enjoy more. Maybe nowadays, you'd prefer a double loot weekend instead of a rapid respawn event. That's basically it. We want to see which one you'd rather have in the beginning of April. One or the other will happen anyway.

During this event, all creatures (except those with Cooperative Loot System, such as Lloyd and other newer Bosses) will generate two independent loot sets upon death, just like the loot bonus of the Prey System. Basically, for every creature you kill it will be like you have killed two separate creatures. It's not possible to identify which item came from which set, since stackable items will be placed in a single stack. During this event it's possible to drop two identical items that are usually found in single units from the same creature. For example, if you're lucky you could get two Dragon Shields from the same Dragon.

While simply doing regular profitable hunts are a good idea for this events, there are some other ways to take the most out of them. For example:

During these events, popular hunting places are usually taken on average and highly populated Game Worlds. For this reason it's a good idea to look for spawns that aren't very popular nowadays since you'll have a greater chance of finding them available and to take advantage of the event.

One important factor to take into account during Double Loot events is that the hunts where you usually have greater profit are not necessarily the most profitable during the event. For example, consider two different hunting situations with regular loot:

During the event, your loot will double (on average, of course), but the cost of your supplies won't change. Hence:

If you're trying to maximize profit, then Hunt B would be better during the event, even though it's worse with regular loot. Generally speaking, places with very good loot are good options, even if it feels like you're spending a lot on supplies. It's also worth noting that during the event your profit will likely be much better than double the usual, because of the fixed supplies cost. In some cases, hunting places that usually turn out to be non-profitable can be very good during the event, specially if it also gives good Experience.

The first Double Loot events were held in 2017 as an alternative to the Double Experience and Skill Events that begun to be held approximately every two months.