TibiaWiki
Register
Don't have an account?
Sign In
Advertisement
in: Hunting Places, Pages with no Implementation Parameter

View source
watch 02:19
Wiki Targeted (Games)
Do you like this video?
Play Sound

Deep below the Fields of Glory and the Maze of Lost Souls.

Demona is hidden below the Maze of Lost Souls to protect the city from bandits and warriors. This city is the home to many Warlocks, Elf Arcanists, Stone Golems and for two Infernalist. There are several quest-items located here.

Killing Warlocks as a Knight:
The following strategy can be applied by Knights when hunting any creature that uses Magic Damage as its primary means of damage-dealing, but is especially useful against the Warlocks in the "lobby" of Demona, i.e. the area that leads to the three other rooms and contains a pentagrammatical formation of walls. Bring a Closed Trap with you and make your way to either the north-western or the north-eastern vertex of the pentagram without fighting any Warlocks just yet. Place the trap inside the one-way passage and lure a Warlock to your vertex of choice. Now quickly position yourself inside the vertex and diagonally adjacent to your trap, which you should open at this point. The Warlock will not know what to do – he can only reach you with his attacks from the square the trap is on, but that position also leaves him vulnerable to your strikes. He will therefore keep ambling back and forth between the trap square and the one before it without attacking you with any of his magical attacks. Attack the Warlock (but make sure Chase opponent is off!) and keep opening the trap over and over in order to prevent him from going invisible. When he is about to run due to massive blood loss, lure him into the vertex and trap him. He can attack you properly now (obviously), but the few remaining hit points he has left are easily eliminated with the help of some physical spells. Rinse and repeat this strategy with the other Warlocks in the room, and your days of burning your feet while frantically chasing after invisible Warlocks like a headless chicken are finally over.

There is much easier method how to dispose od Warlocks nowadays: Knights 150+ can use Chivalrous Challenge spell to force Warlocks to come close (the spell is successful only when these monsters are visible, but works after their disappearance too). From now on, just cast Blood Rage and finish them off quickly with autoattack and Berserk spells. If they reman alive for some time, just recast Chivalrous Challenge and repeat. In case they disappear, throw some area runes or Groundshake spell on them. 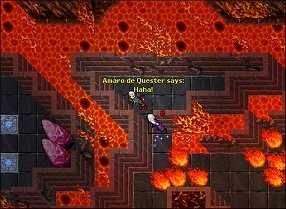 Path:
In order to get there, you'll have to go through the MoLS. Refer to Route:Demona.