You see a deathling spellsinger.

Deathlings or elder deeplings are precursors to the current breed of Njey. With their fish-like appearance but an upright walk, both share a lot of features. Their origin has not been sufficiently studied and they were a mere myth to the younger Njey. Spellsingers are versatile casters with an array of devastating spells. Compared with the weaker Njey siblings they are far more dangerous, even if faced alone. This old breed of spell-singing horrors has perfected their magic and enhances their powerful spells with ancient wisdom of the original Njey. 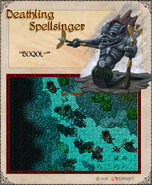 They fight in close combat and do not retarget very often. A deathling spellsinger never retreats.

If possible, avoid staying in front of them because of their strong Holy Beam. Be careful when around them as these creatures can deal strong combos and surprise even high level players.

Retrieved from "https://tibia.fandom.com/wiki/Deathling_Spellsinger?oldid=832673"
Community content is available under CC-BY-SA unless otherwise noted.