In Tibia, you will die when your healthpoints (HP) runs out. Not everything is lost though. The Gods will grant you another chance for a small sacrifice and you can be revived in your hometown's temple. 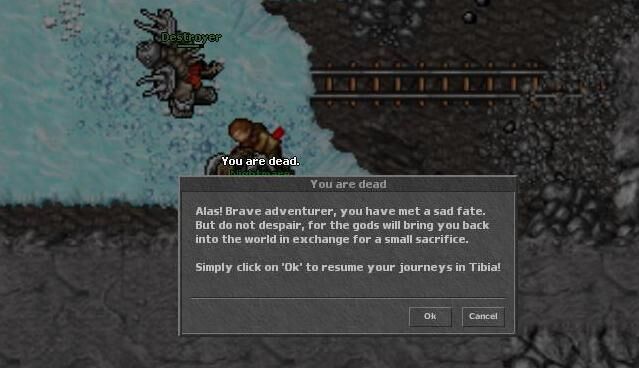 If you ever die, you can still see your dead body for few seconds, before the "Select Character menu" will appear.

The above formula can be used for the maximum % percentage of the total exp, skill tries, and mana spent lost upon death before applying modifiers such as a promotion or blessings.

Due to the loss of experience points upon death, every player whose total amount experience points fall below 1500, which would normally cause a downgrade from level 6 to level 5, will get their level reset to level 1 and will have to start all over with the character on Dawnport again. This is also known as "rooking". All possessions except those in the character's depots, including his Bank Account and spells are deleted upon being rooked.

Skill and experience loss can be reduced in three different ways: by buying a promotion, by buying blessings, and by being killed in an "unfair fight."

for players with level 24 and above, and

for players with level lower or equal to 23.

If a player is killed during PvP combat and the sum of the levels of his killers is greater than his own level, he gets a reduced death penalty. In this case, the amount of experience and skill loss is equal to the victim's level divided by the sum of each killer's level. Death penalty is reduced maximally by 80%.

You can still use an Amulet of Loss to avoid dropping Equipment, if you wear an AoL when you have blessings you will lose both the AoL and the blessings.

If you have a Red Skull, everything you wear will be lost upon a death - even if you have an Aol and/or all Blessings. You'll also lose all blessings upon death except for Twist of Fate.

If you have a Black Skull, everything you wear will be lost upon a death, including AoL and all blessings. In addition, when you respawn in the temple you will only have 40 HP and no mana.

Retrieved from "https://tibia.fandom.com/wiki/Death?oldid=826801"
Community content is available under CC-BY-SA unless otherwise noted.