View source
watch 01:54
Arcane: League of Legends - The Loop
Do you like this video?
Play Sound

West of Plains of Havoc, here.

When construction started during the reign of king Tibianus II, the Dark Cathedral was planned to be the most impressive cathedral of all time. But due to an enormous earthquake its construction was never finished. The convicts who were forced to help build the cathedral decided to stay, however. The ruins are cursed and anybody who dares to go there might not return to the surface. All those that travel there leave the place with bad luck for the rest of their life. Crumbling structures might fall upon the adventurer who can then not escape. Those who survive the dangers of nature will face the soul-eating ghosts of those who have died in the catastrophe. According to Lorbas, there are no riches or treasures left in the ruins, the gold of his order melted away in funding the cathedral's construction...

The Dark Cathedral is located south of the Outlaw Camp, and west of the dreaded Plains of Havoc, and can only be reached by crossing the big plains (On this part is dangerous because on the center of the plains there is some giant spider that can be lured), south of the swamp of Venore.
While the first and the second floor can be reached by going down Stairs, the third floor can only be reached by going through a teleporter. Starting from the stairs on the second floor you have to keep walking south, into a big room, the teleporter is at the end of the room. Before you can enter the teleporter, you have to switch the 6 Levers in the 5 rooms around the big room. There is a time limit of somewhere between 30 seconds and 2.5 minutes (unconfirmed). For that reason, it is advisable to switch the levers with a team, or do one round to kill all monsters, and a second one to switch all levers. Level 40/50 mages can do it in one round, killing all creatures with area attack runes such as Avalanche or Great Fireballs etc.. Or just run, run, run.

Mages can hunt here at level 30+ and get 100k/h by shooting Avalanche Runes. Only thing is that you need a good magic level, so you can kill some creatures in one hit and don’t waste that much avalanches. 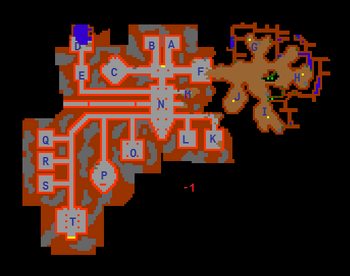