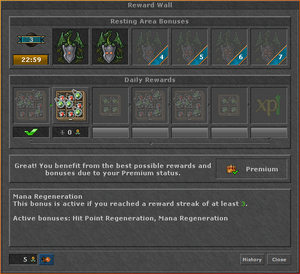 The Daily Reward System is a system introduced with the Summer Update 2017.

You can find Reward Shrines inside the Temples and Depot of all major cities. Upon using, these shrines open a Reward Wall via which you can pick up your reward for the day. On the reward wall, you can also see your future rewards and which rewards you have received already. You can take a new reward once between every 2 Server Saves, regardless of the time you claimed your last reward. For example, you can claim your reward 30 minutes before the server save and the next one 30 minutes after the server save. You can also open the reward wall using the

button under your inventory.

If you are far from a Reward Shrine you can use an Instant Reward Access, available in the Store, to pick up your daily reward from your current location.

The rewards you can take vary according to your position on the Reward Lane, which changes every time you take a new reward. The Reward Lane consists of 7 days with these possible rewards, which are different for Premium and Free players:

The rewards are not tradeable and are sent to Your Store Inbox. You can only choose from runes and potions that can be used by your character's vocation, but there's no filter regarding the character's level. The rewards for the 7th day of the Reward Lane also expire after 7 days and disappear if not used. Once you pick reward #7 you go back to reward #1.

Not taking your daily reward for one or more days does not affect your Reward Lane position.

During Double Daily Reward Events the rewards are doubled, usually for a month.

Picking up your reward on a daily basis increases the counter of your reward streak. As your streak grows, you gain access to special bonuses in addition to your rewards. The bonuses are unlocked during the first 3 (Free Accounts) or 7 (Premium Accounts) consecutive days of taking rewards and stack with each other, staying available until your reward streak is reset.

These streak bonuses are applied when the character is inside a Resting Areas and are the following:

The basic regeneration speeds are the same as if you were regenerating in regular situations, for example outside protection zones for hitpoints and mana, staying offline for stamina and killing creatures for soul points. The double hitpoints and mana bonuses also applies to regenerating equipment such as Soft Boots, which makes it a good way for mages to train their Magic Level for a low cost (the soul points regeneration is fast enough for that).

You can see the bonuses you currently benefit from by opening the Reward Wall using the button under your inventory or by hovering the cursor above the Within Active Resting Area special condition icon. If you miss a day, your reward streak will reset to 1 and you will lose your current bonuses once you take a new reward unless you consume a Reward Joker to continue it. In case of a server reset you do not lose your streak and will have the chance to keep it even after the next server save.

If you miss a day or several days you will be able to continue your streak when claiming your reward if you have the appropriate amount of Reward Jokers for the missed days. They will automatically be consumed when you collect your reward from the shrine.