The Cyclopedia is part of the Analytics functionality that was introduced in the Summer Update 2017. The word is an archaic form of encyclopedia[1] and features a knowledge collection of every item which can be traded in the market.

It has been expanded multiple times: 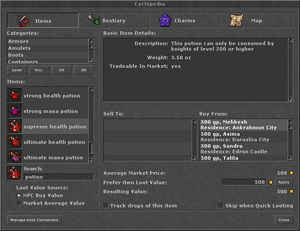 The Cyclopedia is used to change items' prices tracked by the Analytics Selector widgets. Players can select for each item if it will be tracked according to the NPC price or average Market price. Additionally, Premium players are able to set their own loot value for each item. Based on these prices you can use the widgets to keep track of the dropped loot and also analyse the loot value and supplies used during your hunting session. 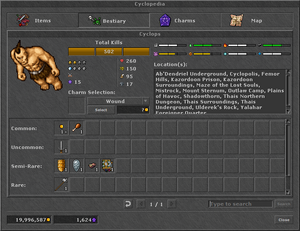 The Bestiary is the collection of knowledge acquired by your character about Tibia's Creatures, which are sorted in different Classes. Initially, every creature and the creature class itself will be displayed as silhouettes. You can gain information about creatures and thereby unlock and complete their Bestiary entries.

To unlock an entry, you will have to kill its corresponding creature. The first kill will open the entry and reveal the creature's name, sprite and its difficulty level. A kill counter will show you the required amount of kills to unlock more information. To increase your kill counter, there are two requirements:

To successfully complete a creature entry, you will have to unlock a total of three detail stages. The first stage will unlock basic information like hitpoints, speed, armor and common loot items, for example. The second stage will allow you to see uncommon loot items, resistances and locations of where the creature can be found. Once you have killed enough creatures to unlock the final stage, semi-rare and rare loot items will be displayed. Very rare loot drops will also be displayed once you loot the item for the first time, as long as you have that creature fully unlocked.

How often you have to kill a creature to unlock more of its details is based on the creature's difficulty. The difficulty also determines the amount of Charm Points that you are going to receive once you have completed an entry. Once you have unlocked the final stage of a creature, you will be able to attach one of your unlocked Charms to it.

Charms are bonus effects that need to be unlocked with Charm Points. An unlocked charm can only be assigned to a completed creature entry and will provide you with a bonus against the corresponding creature.

While assigning a charm to an entry is free of charge, you will have to pay a gold fee if you want to detach the charm from the entry again. The required amount of gold is equal to your character's level multiplied by 100. For example, a level 140 character must pay 140 x 100 = 14,000 gold to detach a charm. 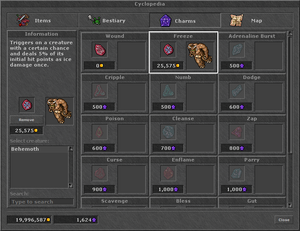 A permanent possibility to assign all of your unlocked charms at the same time can be purchased via the Store for 450 Tibia Coins. It also reduces the amount of gold you have to pay for every charm removal by 25%.

Charms can be offensive, defensive or passive. Offensive and defensive charms have a 10% chance of being activated when dealing or taking damage, respectively. Passive charms are always active (but are still limited to the selected creature), and the charms Scavenge and Gut increase your success/loot rate similar to how the Prey System works.

Based on the number of creatures currently in the Bestiary, a total of 21,385 Charm Points can be obtained in game. Players that fully unlock all creatures in the bestiary will receive the Executioner character title. It costs 17,400 Charm Points to unlock all available Charms.

The Bosstiary is the Bosses version of the Bestiary, albeit slightly simpler. By defeating bosses, players will progress in each boss' entry to unlock new progress levels, receiving boss points at each level. The Bosstiary can be opened through the menu button

under the inventory or by clicking on its tab on the Cyclopedia.

There are three progress levels:

The equipment loot bonus of the boss slot can be increased gradually by accumulating points. The maximum loot bonus depends only on the maximum amount of bosses available in the bosstiary. Also, a second boss slot will be unlocked once you reach 1500 boss points.

There are three categories of bosses in the Bosstiary, similar to Creature's difficulties but based on their availability, not their strength:

With every Server Save, a randomly drawn boss of the Archfoe category will receive a temporary boost until next server save. During that time, slaying the selected Archfoe will count as three kills for your Bosstiary and the boss will also carry more equipment loot than usual, with a loot rate of 250%.

If a boss is selected as daily boosted boss, its cooldown will be reset for every character with server save to ensure that it can be slain in time.

By completing stages of a boss in the bosstiary you'll receive boss points. The amounts of points you receive depends on the completed stage and the boss category:

Based on the number of bosses currently in the Bosstiary, a total of 23,800 Boss Points can be obtained in game which would be equivalent to 190% of boss loot bonus.

Upon reaching Prowess with a boss for the first time the player will unlock a boss slot. A second slot is obtained by getting a total of 1500 boss points. The boss assigned to the boss slot will benefit from the current maximum loot bonus which depends on your amount of boss points. The Boss Slot window can be opened by using the corresponding button

on the main sidebar.

Each character can change the assigned boss once per server save for free. From then on, there's a gold fee that increases upon each change and resets at the server save. After the second change, each subsequent change costs 300,000 gold more than the previous one.

In case more than one character attacks a boss with regular loot, then the conditions of the character that deal most damage will be used to decide if there will be extra loot (if that character has the boss in his/hers Boss Slot) and the chances of the extra loot being rolled.

The Cyclopedia Map is a larger and improved version of the client's Automap. It can display the surface and levels above it using both the map and "real" formats, as well as the underground areas that are explored in the client's map. Map markers are also shown in it. It also displays active raids.

This Map interface is also used to explore areas and sub-areas during Measuring Tibia Quest, which is done by finding Points of Interest (PoIs) in them. You need to find 7 randomly positioned PoIs in each subarea to unlock it, and you can only explore one subarea at a time (starting to explore a new sub-area with an open exploration will reset the progress). If desired, the location of the PoIs can be shuffled, but this will also reset all progress done in that sub-area.

When you have discovered at least 30% of all subareas of an area, the locations of NPCs within that respective area will be shown on the map. Similarly, at a minimum of 70%, passages to different subareas on other map layers and teleports are displayed as stair symbols on the map. Once all subareas of an area have been discovered, creatures that occur in those subareas are listed when you click on a subarea's name or on a passages symbol that leads to this subarea. Creatures for which the Bestiary entry has not yet been unlocked are displayed as a silhouette. In addition, a player who has completed an area will be notified whenever a raid is about to take place in that area within the next hour, and will be notified of the specific subarea 15 minutes before the raid.

For a comprehensive list of all areas and subareas, please view the Cyclopedia/Map Areas page.

On September 06, 2018, CipSoft announced the Improved Respawn Rate system, which was implemented the following week. With this system, the map areas can have their respawn rate increased temporarily between two Server Saves. There is a 33% chance that one randomly selected area of the map will have its respawn rate improved. Furthermore, players can also donate Gold so one area gets its respawn rate increased after the next Server Save. Creatures spawn two times faster in areas with Improved Respawn Rate. These areas will display the following icon in front of their name on the Cyclopedia Map:

The following rules applies to this system:

It's important to note a specific hunting spawn may not belong to the area it's accessed from. Most notably, even though the Hell Hub and its Grounds (Ferumbras' Ascension Quest area) is accessed through Darashia they belong to Roshamuul and Zao. You can check the current area you're in by vising it and opening the Cyclopedia map, or simply by checking this list.

Note: Until Feburary 05, 2019, there was always one randomly selected area with improved respawn, and the gold fee to improve a second area was 1kk instead of 10kk. This was changed with the update 12.08.

Titles are assigned to a character. They are visible ingame when a character is looked by other player, it appears after the character's name and level and before rank and guild (if any) and the loyalty title (if any). It is also displayed on Tibia.com's character page. You earn them by fulfilling different conditions on a specific character (monster kills in combination with the Cyclopedia, mounts, outfits, bank account , levels you have reached, experience and skill, highscores, tournaments, etc.). 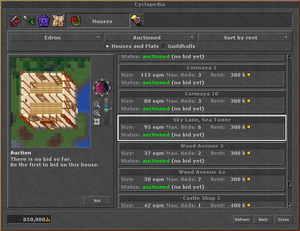 The Houses tab in the Cyclopedia can be used to buy, sell and transfer houses, incorporating the functionalities that used to be exclusive to the Tibia website. Besides the options to search for rented/auctioned houses, one innovation it presents is the opportunity to see all floors of the house as they look in game, without the need to actually visit it.