Chimera was merged along with Grimera and Malvera into a new world Justera on November 10, 2014.

Trojans was made mainly by Mexican players. Centrala won. The top fragger was, once again, Draxido.

Centrala, led by Duravi (deleted), won this war and the top fragger was Draxido. Kapoera was led by Najiwus.

In this war, Centrala and Kapoera joined forces to fight against Draxido and his allies. Potentatus was always the hunting side. However, Seventh Seal was feared whenever they were online, since they had a lot of players known for their PvP skills.

No different than the past wars, Draxido was the big name of this one. But since Seventh Seal (and allies such as Lollipops and Chimerian Protectorate League) noticed even after killing them a lot of times they couldn't beat the Brazilian guild due to the big number of enemies, both guilds did a peace agreement. And then Draxido and most of his crew retired, along with players from the "Death Squad" such as Aruar. Since then the server has been ruled by Brazilians.

This war was declared by Pigs on 06/22/2007 and ended with a peace declaration on 04/04/2008. Pigs started winning the first few weeks but then, after Absolut reorganized and got a new war leader, Duravi (After getting unhunted by Bitter End), they managed to turn the war around, which made Bitter End join the war. Absolut got more allies like the old guild Dragon Society and started winning. This changed when Kazyie made a call for help to all Chimerians to unite on 03/15/2008 to bring the world together on a march for peace. Created a guild called Chimerian Army with anyone who wished to help the cause and also Fy (a guild with a lot of former Lamb of Satan members, mainly mages, of all levels. The guild was later formed into Lamb of Satan and set a level requirement of 45, mages only) joined the war taking a lot of frags in a few weeks, so Pigs decided to become active again, making 3-4 mass logs with Lamb of Satan, which resulted in the peace agreement between Absolut and Pigs. Rumour has it that Cronne, a vice leader of Pigs back then, said that LoS could remain hunted, but Pigs would be free from war without payment, even though it was LoS who helped Pigs win the war. Obviously, everyone from Lamb of Satan disagreed with this peace agreement and were disappointed with Pigs. In a later war between Pigs and Absolut, they of course joined the opposite side, to get revenge on Pigs. Lamb of Satan kept killing Absolut but being the only players to fight, they became Absolut's main priority and it was hard for Lamb of Satan to keep up. This was the longest war of Chimera. The largest battle score of this war was Pigs 26 x 1 Absolut. The final frag count was Absolut 127 x 133 Pigs, according to the thread created by Slayer Angel that can be found here. The top fraggers of this war were Dacrus and Sozter, both with 20 frags.

The guild Blackthorn Army decides to start killing the members of Pigs without big reasons. Then, Pigs declared war against Blackthorn Army. A new alliance was born, Pigs + Lamb of Satan. Blackthorn Army then changed it's name to Abs, excluding more than half of its members, to try to keep Pigs spies out but still their spies were in the new guild. They also merged with guild Resistance. Pigs and Abs then made a peace agreement, but it was decided that the guild Lamb of Satan would stay hunted by Abs.

On 08/14/2008, due to some kills, a war between Thug Life and Resistance came on Chimera. Here is a war declaration of Thug Life. Since the declaration, the guilds Lanniks, Lamb of Satan and Zoo have allied with Thug Life. The guild Seed joined the Resistance side in the war. Although Resistance started with a very large advantage, most of the time Thug Life was the guild who had freedom to hunt anytime they wanted. After some time, due to the big number of members, Thug Life got separated into 4 guilds, according to the players vocation. Resistance became active again and restarted killing their opponents. Lanniks became neutral and some players of the old Thug Life left the war too. On 12/16/2008, both sides made a peace agreement, which you can read on this thread. The top frag of this war was Sofaloso of Chimera with 53 frags. According to the last war thread, the frags ended like this: Squad (Old Thug Life) 142 x 340 Resistance. This is the largest advantage ever that a guild got in a war on the lands of Chimera.

On 06/01/2009, Resistance declared war on the guild Squad (Old Thug Life) without big reasons. The war didn't last that long, and its largest score in a battle was of Resistance 22 x 0 Squad. The top fragger of this war was Briasa Alyr, with 9 frags. On 01/17/2009, after talking during the whole day, both guilds became to the conclusion that the best to both sides would be making an alliance: The Second Reich, the biggest of Chimera, with more than 230 members in it.

On 01/25/2009, Lanniks went to a fight against Second Reich, which started this war. Second Reich won the first battle, although Lanniks took a lot of frags too. The war is current and Second Reich is dominating it due to its monstrous number of members. All of SR were banished due to their guild name for two days. However the ban was lifted due to a "borderline case", the apology by GM Guardian Angel Chimera can be found here. Second Reich is now known as Divinity. The guilds Excedo Letum, Attitude and |Prodigy, amongst other smaller guilds, are now allied with Lanniks. Divinity Reforce and other smaller guilds are now allied with Divinity. The current frag thread can be found here.

On 12/02/2009, Dark Spykerath, leader of Divinity, Declared war against Stick Together, here. Stick Together led by Drgzika Eros Frozen, won the war easily. 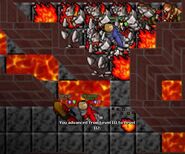 Draxido, the most powerful player during a long time, level 112.

Devovorga has been killed on Chimera on Sep 5th, 2010
Add a photo to this gallery 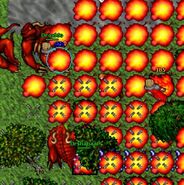 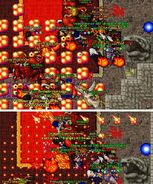 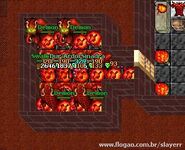 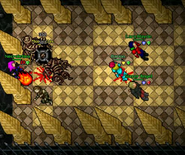 Morguthis in the old times.

Rahemos in the old times.
Add a photo to this gallery

One of the first wars of the world.

Retrieved from "https://tibia.fandom.com/wiki/Chimera?oldid=717536"
Community content is available under CC-BY-SA unless otherwise noted.