The official abbreviation of Tibia Bank is TB. It was previously abbreviated as BoT (Bank of Tibia) but this has been changed.

Bot is another word for 'macro', an automated program which, in Tibia's case, controls your character. In other words, it's an unofficial software to play.
Bots may seem to give you an advantage in the game, however using any kind of bot is a severe rule violation (3b), and may lead to a 30-day banishment or to account deletion. On top of that, there's a good chance you'll get hacked by such programs.

I found someone using bots, what should I do?

You have 4 options so far:

I see a botter, why isn't he banned by the system?

The anti-cheating system does not ban botters instantly. First it collects evidences and in the beginning of every month, the system deletes around 2,000 botters in a mass ban.

Why can't I report botters anymore, and how can I stop or kill a botter?

You can report botters! Just remember that you must do it using the report feature and not through Gamemasters, because they no longer exist. The following information will help you to stop a botter or kill the bot. Just remember, some bots may automatically 're-log', and you can try the same vulnerability again and again. Just be careful with getting skulls if you attack a botter on Open PVP worlds.

At the moment, vulnerability 5 - Yellow Skulls - is the most valuable, as it allows you to kill the botter repeatedly without getting unjust kills after your first unjust kill of the botting character.

Many bots have waypoints. This means that the software instructs the bot to move to certain squares, ramps, or holes in a certain order. This can be exploited in two ways. Firstly, watch the bot for it's pattern, it's path. If you notice that it moves to a certain square, and then off in another direction, that is possibly one of it's "waypoints". If you put a trough, an indoor plant or any other item, that is not walkable, on that square, the bot will move to that point and stall. This includes ladder squares. Now you are able to move the character one square at a time away from the waypoint. If you continually move the character one square at a time at high enough speed, you will be able to move the character anywhere. If, however, you pause, the bot will return to the blocked square if it is accessible. This will not happen if the blocked waypoint is still on the character's screen.

The second option with waypoints is to use the waypoint against the bot itself. If there is a waypoint close enough to a hole, this can be exploited as well. Simply find the waypoint close to the hole, and block the character in when it arrives to the waypoint. On the North, South, East or West side of the hole, there should be 2 squares available for this manuever. When the character is blocked in, move him to the second square away from the hole, vertically or horizontally. Almost exactly 1 second after you move him to that square, move him towards the hole, and he will go down the hole, whether it is a shovel hole, or any other hole. 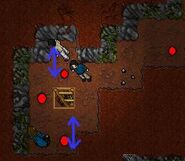 Red = possible waypoints; Blue arrows = directions to move the char ahead of the bot.
Add a photo to this gallery

The explanation is that the bot will try to reach the waypoint after you have moved the character. But if you move the character after the bot realizes it needs to move, and before it moves the character, it will fall down the hole. This is very useful for taking characters to lure creatures on them in other spawns. Be forewarned, however, that luring creatures on a character is veiwed as against the rules on the island of Rookgaard and on Optional PvP Game Worlds and could be punished as a rule violation.

Another vulnerability is a rune maker. Most bot software will automatically take a blank rune from a backpack, and switch it with the weapon in the hand slot, and utter the spell phrase for the rune. Many characters who use this software also hunt at the same time. There is a feature on some bots that initiates attacks on any players that attack it. They also automatically use mana to heal themselves if attacked. If, however, you can time your attack at the moment when the blank rune has just been inserted into the hand slot, and the mage begins to use mana to heal itself, it will not be able to make the rune, and will only be able to hit you with it's fists, instead of a wand, rod, or melee weapon, or other attack option of it's choice. Beware, though, because some bots use the option of spell attacks such as exori vis and exori mort, and these may cause much hp loss to you while trying to attack the botting character. Most botting runemaking/hunting characters will not use that option however.

Many bots also use a feature which allows the character to make runes and eat food and to automatically log if a gamemaster or any other character comes on their screen. This often eliminates the possibility that they will be killed by a passerby who finds them "afk". If, however, you know where they are located, and shoot a ranged attack rune on the ground where you know them to be, this will cause them to have a battle lock, and as you walk up to the character, the bot may force log, and leave their character in the game for 60 seconds. You will have that much time to take the hp of the character down to zero, before they are disconnected automatically from the Game World.

Some of the newer bots have a new vulnerability. All you need to do is find the pathway of the botter, and trap the type of creature you have seen it hunting. Use parcels, crates, or other blocking items to block the creature in so it can't be walked to without climbing over the obstacle.

What will happen is this: The bot will walk along its pathway, and see a creature it needs to attack, but the parcel or crate blocking it does not allow it to take the path it needs to attack, and the botter will just sit there, immobile, until one of the following scenarios occurs:

This is perhaps the second most useful of all the vulnerabilities at the moment. The next vulnerability, Yellow Skulls, is the most valuable at the moment because it allows you to kill them repeatedly without getting unjust kills in succession.

Here's one of the most useful vulnerabilities yet! This may not work with all botting software, but it has been confirmed that it works very well against commonly used botting software. You'll need to get a white skull first (preferably on a friend) and then go find the botter before you lose your skull. You can step on a dead creature immediately after the botter has killed the creature, and the bot will accidentally click on you instead of the dead body, giving the botter a yellow skull. You can run off and lose your white skull, and come back and kill them as a justified kill (no pz block) because they will still have a yellow skull due to their continued hunting / botting. You can continue this procedure again and again without risk of getting a 15 minute pz block due to an unjustified kill. This is the most useful vulnerability because you can return and kill them over and over and over without getting pz block or a white skull.

- Credits go to Ocean of Lightnings on Premia for the above info in vulnerability 5.

You can also kill them once as an unjustified kill, and then when they log into the game again, you will have a skull on their screen. Try stepping on a dead body of a creature they just killed before the bot loots it, and they will attack you accidentally, upon which you can kill them, and the kill will be justified, meaning you will not get a pz block or a skull.

If you are going to kill a botter, you need to realize that the player might not be away from their keyboard at all. Most bots have the option of playing an alert or sound if another player attacks or simply traps him using the waypoints vulnerability. There is no way of knowing for sure if the botter will be alerted of your attack. This is why it's a good idea to have a second character, or unimportant character to test it. However, most botters are away from their computer really late at night or really early in the morning (EST) or moments when most players are not online (Like during test server times). It's also important to know that many bots can "auto-reply" to some words, like "Hello", or simple questions.

In the 7.8 Update, CIP added Stamina to the game to help lower the effectiveness of botting by reducing the amount of time that players could hunt. To normal players, Stamina is mostly irrelevant. However, this didn't solve anything, botters still chose to bot. It just forced botters to bot less.

The only way to get away from these creatures is to run away. They have the same status as boss monsters so they are not limited by the luring rule and they will disapear after some time.

A few days after the update was released CIP modified these new creatures. Before they were edited they were able to combo 400+ which were killing a lot of players (especially low level mages) including fair players. After they were edited the damage of these creatures was greatly reduced allowing them to combo about 150.

Retrieved from "https://tibia.fandom.com/wiki/Bot?oldid=661706"
Community content is available under CC-BY-SA unless otherwise noted.