Wyda the witch talks about the usefulness of this herb. It grows near dead trees, perhaps you should try the dead tree not far from her house?

From Venore, leave via the south-west exit, following the road north-west. About 3/4th of the way to Dwarf Bridge, branch off north and find the hole to Venore Rotworm Cave (here). Open the Loose Stone Pile with a Shovel and go in.

Go down another floor and head north. Rope up when you find the next rope hole and follow the path to the north-east end of the cave. At the end of the cave there are 3 branches: the northern set of ramps leads to the Bewitched cauldron, the eastern hole leads to the Silver Brooch Quest. The blood herb quest is up the ladder. 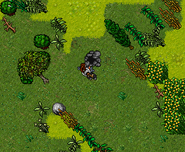 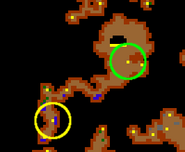 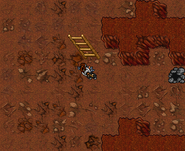 Go up the ladder and you'll be on the surface with a Wasp and a coffin. In the coffin is Key 5000 which opens Wyda's home, but you don't need it.

Go up another ladder to reach Wyda's home. Now walk along the boards bordering the house until the end. Be careful because 2 Witches spawn on a hill to the east and can shoot you as you walk. Go down the ladder and cut the Jungle Grass to the south. Go south under the witch hill and then east to the Loose Stone Pile. Use a Shovel and go in. Follow the passage to the east. The path will now branch in 2. The eastern ramp down leads you to a part of The Inquisition Quest, where The Count is spawned. The blood herb quest is up the western ramp. Prepare yourself and go up to fight a single Giant Spider. Kill the giant spider and open the Dead Tree on the north side of the small piece of land to receive the Blood Herb. 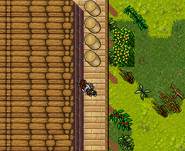 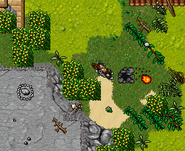 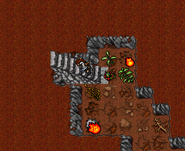 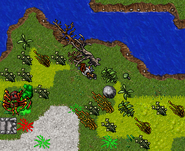 Now backtrack to Wyda and decide if you want to trade the Blood Herb you found for her Witchesbroom. Lots of players think this is not worth it because Blood Herb is very valuable decoration. The choice is yours.

You can also save your Blood Herb for when Wyda is bored for a chance to obtain a Torn Teddy.

Retrieved from "https://tibia.fandom.com/wiki/Blood_Herb_Quest/Spoiler?oldid=833614"
Community content is available under CC-BY-SA unless otherwise noted.