This is arguably one of the best shields in Tibia. This shield has been gifted a few times by the gods to those they deem worthy. The very first Blessed Shield in Tibia was a gift from the gods to Elleshar. He sold the shield to Muesli. Lightbringer was an owner of a Blessed Shield, however he sold it. This remarkable shield might not be obtainable in game ever, only as gift from the gods as previously shown. After a few years of doubts whether it still existed or not, the legendary shield reappeared on Antica. 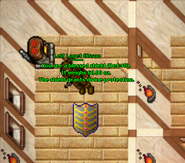 In the hands of Leif Loget Olsson

A really old pic - Lightbringer and his shield 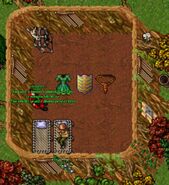 The very first blessed shield on Antica, was a gift from the gods to Elleshar in appreciation for her contribution to game graphics. He sold the shield to Muesli with the promise of never selling it, but he later broke it when he held an auction for it. Among the bidders were Yi, Slayn and Lightbringer, being this one who bought it.

Initially the defense status of the shield was 50, but it was decreased to 40 with Update 7.0. Despite that, until Summer Update 2018 it was the shield with the highest defense rating, until the Falcon Escutcheon was added to the game with the same defense, but better status overall. The Soulbastion was the first shield added to the game to surpass the Blessed Shield in defense.