The former commander of the Royal Army was abandoned by his fellow humans and now has some bones to grind with them...

Skeletons, Scorpions, Slimes, Bonelords, a Wyvern, and the Black Knight

Leave Venore from the north-west exit, traveling north-west toward the Amazon Camp. This is the most direct route, but you can also go through the amazon camp from the eastern side of The Big Old One. Stop when you find a large ruined building immersed in the swamp (here). Go down the stairs to the basement of this building.

On this floor of the basement you may find Bats and a single Slime. Go to the south end of the basement to find a door. If it is locked, open it with Key 5010. Go in and down the stairs inside.

You may find one of the parchments on this floor. Go down again.

Follow the cave. When the cave splits in 2, pick either direction. Both directions will take you to the same area. Drop down the hole at the end of the cave.

Follow the cave south. Rope up at the end of the path.

Follow the cave furthest south again to a room with a few Skeletons. Drop down either of the two holes in this room.

There are 4 Bonelords on this floor, one in the north-west and south rooms, one in the east room and one north by the stairs. Go east until you hit a wall and then follow the cave north to find stairs. Go down the stairs.

To the north is a level 50 Gate of Expertise. Go through it and head north. There will be 1 Skeleton, 2 Bonelords and 1 Wyvern in this large room. Kill them and go through the teleporter to the north.

The teleporter brings you to a circular room with the Black Knight, 2 Bonelords, and a few Scorpions. Kill the monsters (recommended to kill the Bonelords and Scorpions first as they have little health) and go south to claim your rewards.

At 4 corners of the room there are Dead Trees, the two southern trees contain the Crown Shield and Crown Armor. The other trees contain nothing.

Players doing the Secret Service Quest must come here to either kill the Black Knight or obtain an item from one of the two sealed doors to the south.

You can now leave through the teleporter on the south side of the room, which will take you to the floor you were in before. 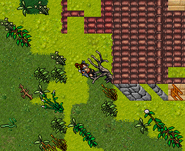 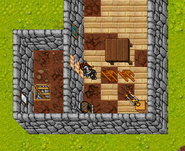 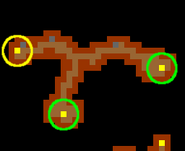 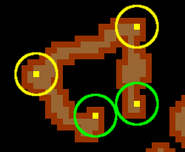 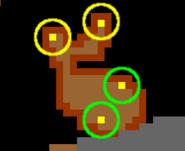 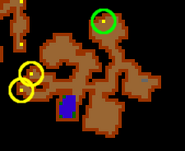 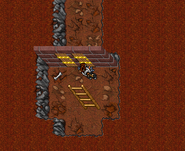 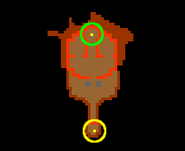 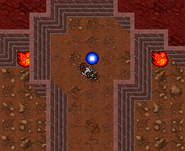 Teleport leading to the Black Knight. 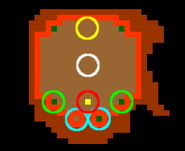