To avert the wrath of evil spirits, all Tibians will have to help the good witches to create a powerful spirit brew. Gather exotic ingredients and protect the witches' cauldron from the forces of destruction.

Snakes and Rotworms on the way to the quest area and Bane Bringers as well as the Bane Lord during the event.

Points that can be exchanged with Minzy for Potions and Raven decorations, 7 Achievements (20 points) and 50% experience bonus for 10 days.

This world quest used to take place between the server saves of January 12 and January 16 until 2018. This was changed when the Winterlight Solstice was added with Update 12.02. Also in 2019, Chicken Feathers, Bonelord Eyes and Vampire Dust, were replaced by Marsh Stalker Beaks, Small Flasks of Eyedrops and Lancets, and the Experience Bonus raised from 20% to 50%.

The required equipment may vary depending on the way you use to reach the quest area. If you follow the method shown in this page, you will only need a machete.

The cauldron needs approximately 200 of any of the following items at one time (not per person), you may add as many as you can until the pot is full.

The event happens near Venore under the Green Claw Swamp. The quest area can be reached by many ways, one of the entrances is located here. 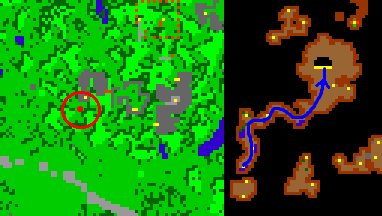 You must go down several levels in order to get to the quest area (here). 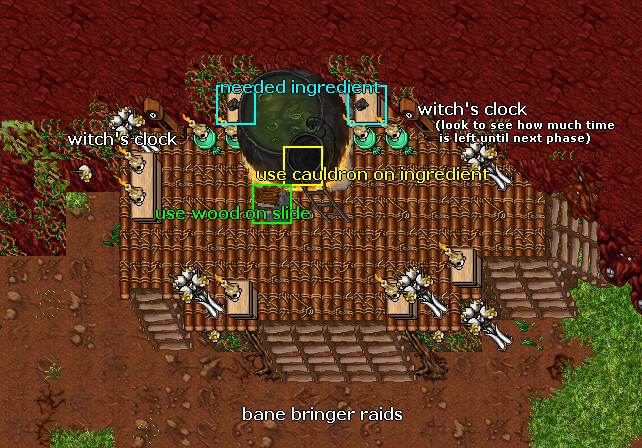 A new phase begins every 8 hours starting after June 21 Server Save. When the event starts, the message
The witches of the green claw swamp need your help to protect the world from the bane-bringers.
can be seen upon login. every phase a server message will be shown:
The swamp witches need new reagents for their brew!
It's possible to check the time left until the next phase by looking on the Witch's Clocks around the cauldron.

Ingredients are shown in a room before you get to the cauldron's area. The ingredients you need are chosen randomly (except for the first, which is always Lump of Dirt on all servers) and can be repeated. The cauldron needs 200 of the needed item every phase.

You can also use dry pieces of wood to receive extra favour points. Note that these pieces must be used on the slide of the cauldron. Also, dry pieces of wood do not have any consequences for the quest or its success. This means your world won't lose the event if nobody adds wood to the slide.

Dry Pieces of Wood can be looted from Bane Bringers which spawn randomly in the area below the cauldron as well as in the beginning of every phase, except for the first (20-35 spawns every raid). They can be killed effectively using physical attacks. If they are not killed, however, they will disappear after 10 minutes. There is also a chance for to Bane Lord to spawn, a boss which carries up to 3 dry pieces of wood as well as rare Taming Items.

Once you've added items to the cauldron, you can speak to NPC Minzy (here) about trading. You can trade favour points earned through filling the cauldron for Health, Mana and Spirit potions or a Raven. You will get an amount of favour points for each ingredient you put into the cauldron, which varies with the different ingredients. Keep in mind that the favour points you gained will transfer to the next year's event if you choose not to spend it now. For more information, ask about her "job", "ingredients", "favour" and "trade".

*Note you can only pick one per year.

If your world fails to supply the cauldron with enough ingredients the quest ends and no more phases will start. The side effects from failing the quest are still unknown.

The message "The curse of the bane-bringer has come over Tibia. Prepare for dire times!" appears upon login.

A book nearby describes what to do when the quest begins.

Total of 22 points, 20 if you do not consider I Did My Part which can also be obtained during other events.

For 10 days the Game World will get: