Banuta is a city of apes north of the Tiquanda jungle. It was originally built by the lizards with apes as their slaves, and was called Cha'zzar under the rule of the lizards. Their intelligence as well as their superior physical abilities enabled the lizards to rule the jungle for many centuries.

Over time, the strength of the lizards was diminished by disagreements within their own kind. It was because of this conflict that the apes were able to defeat the lizards and drive them from the city. Because the apes did not possess the skills and motivation to continue building and maintaining the city, they have let it fall into ruins. Today, Banuta has been nearly completely reclaimed by the jungle. The city now consists of moss-covered walls, decayed pagodas and complicated dungeons.

Banuta can be excellent experience and easy cash for any vocation as long as you know how to approach Sibangs. All apes use haste, and in most cases they swarm, so chasing them can be a very bad idea. Instead, knights (level35+) and mages (level 27+) with monks should manipulate Sibangs and Merlkins by attempting to get them into a corner of a temple. Then, by standing diagonal to the enemy, it will not run as long as there is a wall by either of its exits. Learning how to fight these dangerous enemies can be deadly at first, so it is recommended that you always bring healing potions or have a healing spell ready. It is an entirely different story for paladins, of course. They can easily begin hunting here at level 27, and as long as they go cautiously, it is easy to avoid rune/mana potions usage.

The dungeons below Banuta are far more dangerous than the above ground portion of the city. Rumor has it that Hydras, Serpent Spawns, Medusae, and other deadly creatures deep below the city, for those brave enough to seek them out. Hairycles tells people that they don't dare to discover this area, and he needs warriors to destroy the altar where their God is praised. However, don't worry about simple exploration underground through floors -1 and -2 which contain nothing but apes, and they can be very profitable.

East and South of Banuta, you can find the Tiquanda Laboratory, the Tiquanda Dwarf Cave, the Hydra Mountain and the ominous Forbidden Lands. 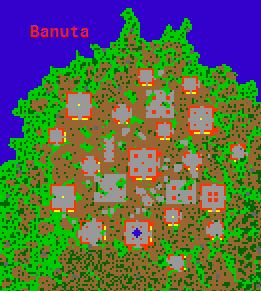 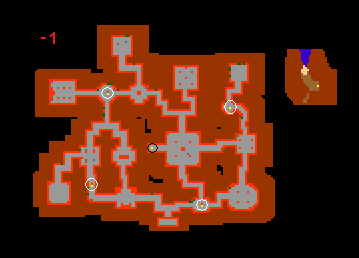 The white circles mark the 4 Stairs up to surface, the black circle marks the Stairs down to the second floor. 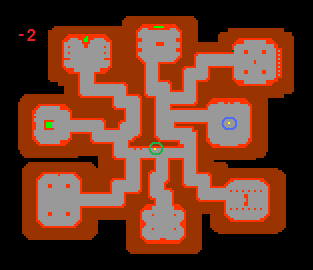