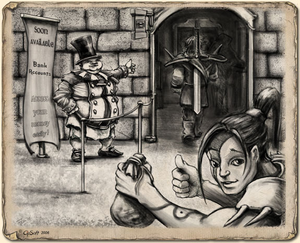 A Bank is a place where you can exchange Gold Coins, Platinum Coins, and Crystal Coins. Each Bank is occupied by a Banker. Since the 2006 Christmas Update, Banks provide players with a Bank Account, which allows players to deposit their gold, withdraw gold in case they need to spend some of it, and transfer gold to other characters. Since the 2014 Christmas Update, it's also possible to transfer gold to guilds.

Also, since the Christmas update of 2008, characters in Rookgaard cannot deposit more than 1000 gold in their Bank Account.

In-game you can get various fun messages from bankers such as:

Retrieved from "https://tibia.fandom.com/wiki/Bank?oldid=781834"
Community content is available under CC-BY-SA unless otherwise noted.