TibiaWiki
Register
Don't have an account?
Sign In
Advertisement
in: Deprecated from Test Server, Deprecated, Creatures,
and 32 more

View source
watch 01:54
Arcane: League of Legends - The Loop
Do you like this video?
Play Sound

This article or section is deprecated from a Test Server.

The information on this page is no longer relevant to the Tibia or TibiaWiki community. It was clearly seen on an official test server, but has not been encountered in-game.

The information in this page or section may not be accurate, but this page should be retained for posterity.

He was once the strongest monster in Tibia, but this is no longer the case. He is a Member of The Ruthless Seven, The Total Destruction. Apocalypse's throne is in the Pits of Inferno. He was summoned three times by CipSoft members on Test Servers (May 2006, November 2009 and July 2012). The last time it appeared it was slain, but unfortunately dropped no loot. 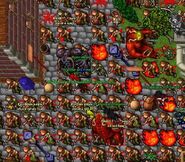 Apocalypse and its new look, seen in the Test Server of the Autumn Patch 2009.

Apocalypse from the private test server of the technical summer 2006 update. 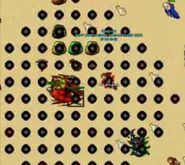 A couple of stronger blockers (level 300+) using Stone Skin Amulet and Might Ring and a large group of mages shooting SDs... or just run for your life.