See also: A Visit to Ab'Dendriel
Ab'Dendriel is a city mostly inhabited by Elves located on the northern part of the Tibian Continent, here. The name Ab'Dendriel comes from the Greek word déndron, which means 'tree'.


Ab'Dendriel flourishes in nature: the houses, shops, and depot are largely supported by trees, which is no surprise for the culture of the citizens. Most of the townsfolk believe in the god Crunor, the earthern tree god. It is unknown whether or not Crunor had part in the nature's growth around the city, but it is most certainly not something visitors see every day.


The elven castes of Ab'Dendriel consist of three groups: The magic users Cenath, the crafty Kuridai and the scouts Deraisim. There are also two elven castes which have been lost: the Teshial, who were affiliated with dream magic and are suspected to have disappeared over time in an eternal dream, and the Chelabdil, suspected to have become extinct after Orcish hordes attacked the city. The Ab'Dendriel Library contains a collection of books dealing with these castes.

Among other things, Ab'Dendriel also features the Hellgate Prison, a route to the island of Draconia, and a maze of bushes with in the middle an enormous tree named Ashar'Tel.

Note: You can communicate with the NPC's in the elven language here. Ashari means "Hi", and Asha Thrazi means "Bye".

Charles: My visits there were interesting and I learnt a lot about the elves and their city. I can only recommend a visit there and if it is only to admire the amazing architectural style in which the city was built.

To become a citizen of Ab'Dendriel, you must walk through the maze-like garden. There are no creatures around, but you will need a Machete or similar tools to cut down Jungle Grass. 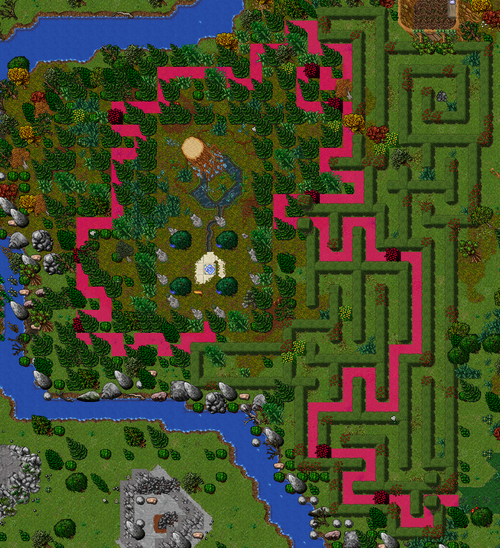