Go to Baxter, he is outside the Rain Castle, in Thais.

Ask him about the "Orc War", and he will tell you that there are 3 tasks you can do:

NOTE: The outpost can only be repaired once every 6~7 hours. Buy 44 Bricklayers' Kits from Baxter. Go to the Wyvern nest in Ferngrims Gate, outside the Orc Fortress, here. Your mission is to repair 4 outposts and 2 walls. To repair a broken Brick Wall you have to use a Bricklayers' Kits on it. It's fully repaired when an orange warning appears and the orcs spawn. Orcs will spawn in waves every 30 seconds for five minutes. During these attacks orcs can drop Orc Tusks. For the quest it does not matter if you kill the orcs or not, when you see the warning, you can just go to the next place (if nobody kills the summoned orcs, they will dissapear after 10 minutes).


Archivo:Outposts.PNG
This image will help you to locate the walls and outposts.

NOTE: The Orc equipment can only be set on fire once every 6~7 hours.
For this mission you have to set the following war machines on fire:

Buy Fire Bug for this task and go here:
Archivo:Balistaes.PNG

Find the Balistaes (8) and set them all on fire with the fire bug. When you are done, go to the Catapults: 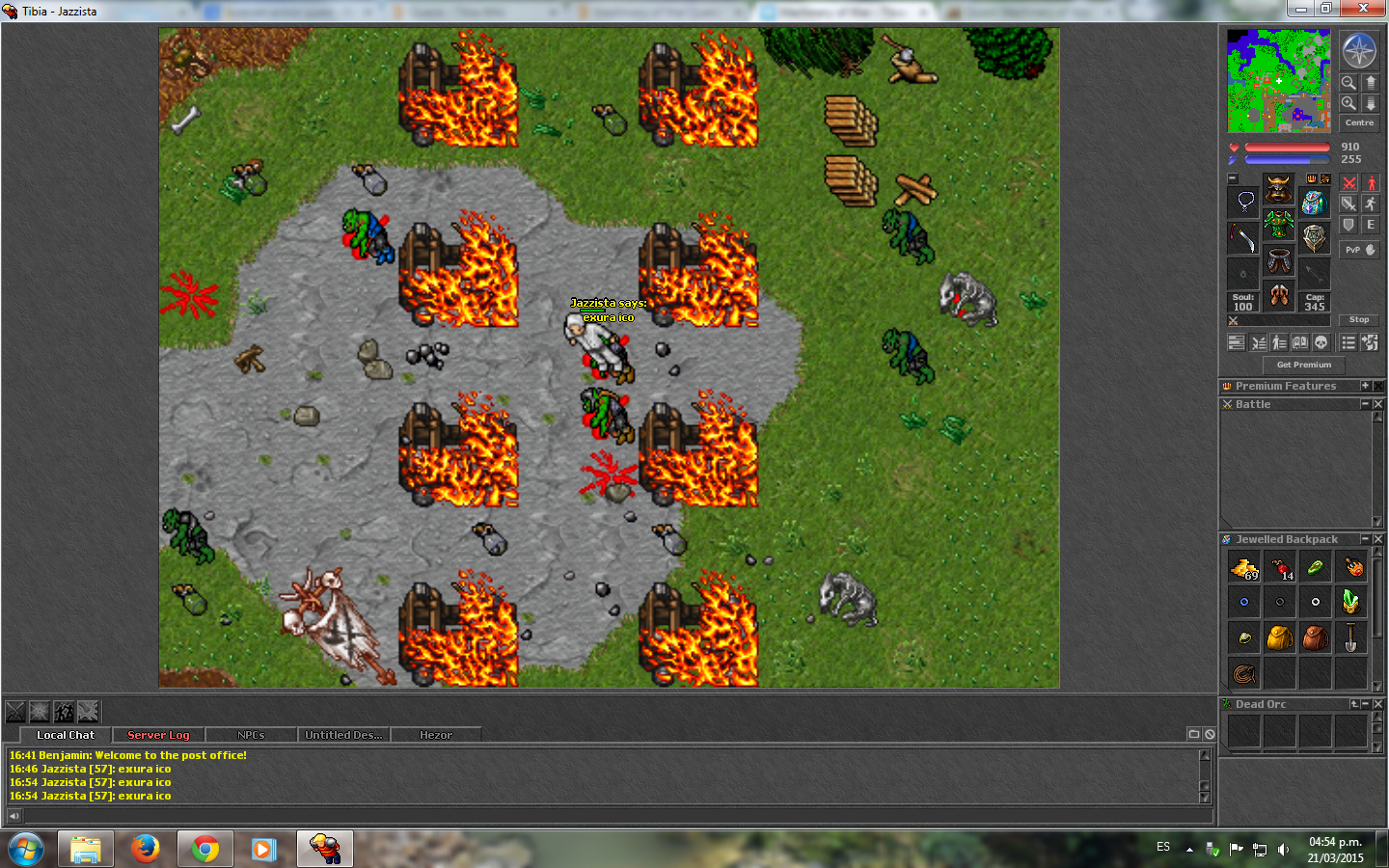 Find the catapults (8) and use fire bug on them as well to set them on fire. Finally, head south of the Orc Fortress to the Siege Towers:
Archivo:Siege Towers.PNG

When you found the Siege Towers, put all the wheels (3 on each) of it on fire.

After setting all the equipment on fire, report back to Baxter and tell him you have made an achievement.

When you've done the other 2 missions, go to Baxter and ask him about War Plans. Go to Orc Fortress and go down 1 floor.

The plans are at the northern wall. Use them and an orange text should appear saying you should report back to Baxter. Go back to him and tell him about the 'war plans' to be awarded 1000 experience points.

When you complete this mission you need to wait some days before you can do it again:
Baxter: We already know their current plan! Come back in a few days. By then they might have changed their plans and I will have a mission for you.

You can complete the war plans part of the quest as many times as you like, independent of the repairing/burning parts.

To raise your rank, complete multiple achievements (NOTE: You can either complete the Task 2: Burning war equipment (once) or Task 1: Repairing the outposts (twice) to increase your rank):

Make 3 achievements to become a Henchman and get additional 2,000 experience as reward.

Make 6 achievements to become a Mercenary and get 3,000 experience for this advancement.

Make 12 achievements to become an Orc Butcher and get 5,000 experience for this advancement.

Make 15 achievements to get the highest rank - War Hero. You will get 7,000 experience for this advancement and from now you will get 2,000 (instead of 1,000) experience each time you finish an achievement.

Player: hello
Baxter: LONG LIVE KING TIBIANUS!
Player: Do you have a mission?
Baxter: We've got a rat problem in the sewers. In the name of our glorious king, I'm paying 1 blinking piece of gold for every freshly killed rat you bring me. ...
Baxter: You seem strong! Do you want to help fighting the orcs? They prepare themselves for war! We need everyone who's capable of killing greenskins! Ask me about the orc war if you are interested.
Player: Please tell me about the orc war
Baxter: I hope you know where to find orc land!! There are various things that you can do for your country! First of all, we need to establish some outposts that need to be maintained. ...
Baxter: For that, you can buy bricklayer kits from me. Just tell me if you need some. Secondly, the orcs are building ballistae, catapults and siege towers for their attack! Set them on fire! ...
Baxter: Thirdly, we need to find out what they are planning. Go find the current war plans! Actually they are not THAT smart, so they don't change them very often. Ask me first before you are heading there for nothing! ...
Baxter: That would be all for the moment. Oh I forgot, you collect achievement points while you're on duty. Ask me regularly about them, you might get a promotion if you're doing well!

Player: where exactly is the orc land?
Baxter: It's north east of here. Pass the mountains of Kazordoon and go east. Past the wyvern nest, you'll find our outpost and then you'll enter Ulderek's Rock. Take care!

player: achievement
Baxter: Not bad, you will come a long way if you keep up the good work!

or, when advancing in ranks

Baxter: Good news everyone!! player will be promoted to 'henchman' of war! Congratulations!

Baxter: Good news everyone!! player will be promoted to 'mercenary' of war! Congratulations!

Baxter: Good news everyone!! player will be promoted to the rank of an 'orc butcher'! Congratulations!

Baxter: Good news everyone!! player will be promoted to the highest rank, a 'war hero'! Congratulations!

player: war plans
Baxter: We already know their current plan! Come back in a few days. By then they might have changed their plans and I will have a mission for you.
or
Baxter: The orcs are moving their troops. We need to know what they are up to! Go to the orc fortress. There should be some kind of blackboard somewhere. Study it and tell me their plans!